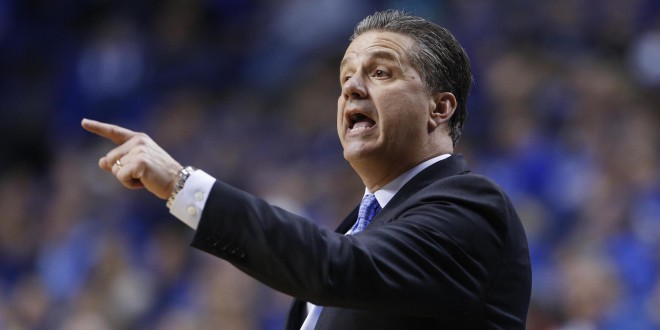 Kentucky is looking for revenge in Lexington tomorrow night after a surprising loss to Tennessee earlier this month.   Kentucky’s credentials were called into question after dropping a 21-point first-half lead in an 84-77 loss to the Volunteers on February 2.

Now, the #14 Wildcats (19-6, 9-3 SEC) are playing their best basketball and are looking for another victory as the postseason approaches. Kentucky dominates the SEC with recent wins against Florida, Georgia, and South Carolina.  Kentucky even won Saturday against the Gamecocks without Coach John Calipari, after he was ejected for two technical fouls in the first half of the game.

SEC Freshman of the Week Jamal Murray leads the Wildcats this season in scoring and continued to prove his skills averaging a team-high 25 points against Georgia and South Carolina this week.  Murray and sophomore Tyler Ulis teamed up for 53 of the team’s 89 points in Saturday’s victory over the Gamecocks.  Coach Calipari says he is proud Ulis’s constant improvements.

This is where Tennessee’s strength lies.  In the previous matchup, the Volunteers (12-13, 5-7 SEC) held the Murray-Ulis scoring team to a combined 10-of-30 shooting.  Tennessee also has a weapon in Kevin Punter Jr.  Punter is second in the conference in scoring, averaging about 22.2 points per game, and he has scored 21 or more in seven of his last nine games.  However, he is shooting 36.8 percent over the past four.  Tennessee needs his best performance against Kentucky’s strong backcourt.

Beating the Wildcats will prove to be a difficult task.  The Volunteers are 1-11 away from home this season and have lost 14 of 15 on the road in the series, including eight straight.

Previous Gator Softball Wins First Home Games of Season, Sweeps Jacksonville in Doubleheader
Next Orlando Magic Look Ahead to Second Half of Season