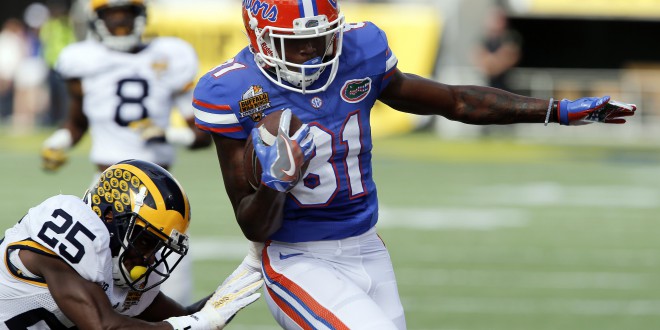 With Callaway Out, Who’s Next?

College football is back, with spring practices happening all across the country including at the University of Florida, where practices began Wednesday.

Florida coach Jim McElwain announced that quarterback Treon Harris and wide receiver Antonio Callaway will not practice with the Gators this spring.  McElwain did not specify why they were suspended, but this is a substantial loss for the Gators at the wide receiver position.

Callaway had a remarkable freshman season leading the Gators with 35 receptions for 678 yards.  If he was allowed to practice, Callaway would understandably be the go to receiver for the Gators.  The Gators will also be without Demarcus Robinson, who decided to enter the NFL Draft; he accounted for 48 receptions for a total of 522 yards.

With the loss of Callaway and Robinson, the Gators are looking for playmakers this spring at the wide receiver position.   But who will that be?

Returners Brandon Powell, Ahmad Fulwood, and Alvin Bailey combined for only 38 receptions totaling 500 yards total last season.   Former Gainesville High receiver Chris Thompson also returns.  It remains to be seen if any of these returners will impress during spring drills.

The big question mark comes in the form of three early enrollees at the receiver position in Joshua Hammond, Dre Massey, and Freddie Swain.  All hope to compete for a starting spot or at least playing time next year.  McElwain recruited well and is excited to see the new guys compete.

McElwain is known for his love of player competition; he kept Will Grier and Treon Harris competing for the starting quarterback position well into the season.  However, with Callaway’s future in doubt and Robinson’s departure, the Gator offense will need to find playmakers at the receiver position sooner than later.

We might know more by the time the Orange and Blue game takes place next month.