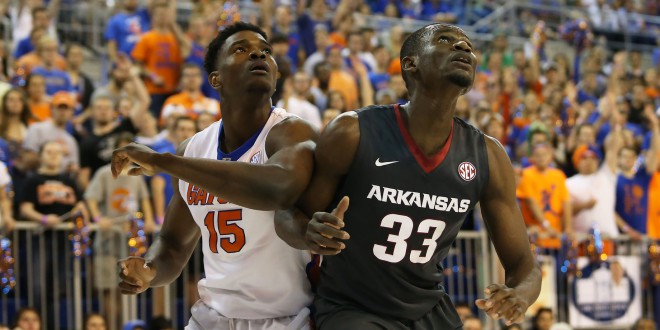 The Arkansas Razorbacks men’s basketball team looks for revenge against the Florida Gators on Thursday in the first round of the 2016 SEC Tournament.  The Razorbacks are the No. 9 seed, while the Gators are No. 8.

The Florida Gators (18-13, 9-9) hosted Arkansas (16-15, 9-9) in the teams’ only meeting of the regular season on Feb. 3.  Senior Forward Dorian Finney-Smith led the Gators to an 87-83 victory with 22 points and nine rebounds.  The Razorbacks kept pace with the Gators thanks to senior guard Anthlon Bell‘s game-high 24 points.  The Gators have won nine of their last ten meetings with the Razorbacks.

The Razorbacks are coming off of wins in four of their last five regular season games.  They lost their last game of the season to South Carolina.  They look to carry that earlier momentum into the post-season as they face Florida in the first round of the SEC Tournament.

“I think in tournament play, the most important game is going to be that first game, so our eyes are right on Florida and hopefully [we can] go in and play well,” said Arkansas Head Coach, Mike Anderson.

Arkansas boasts three players in the top 10 on the league’s list of highest scoring players.  Moses Kingsley, Dusty Hannahs, and Anthlon Bell occupy the eight, nine and 10 spots on the list.  The Razorbacks are the only team in the league with more than one player in the top 10.

The Razorbacks’ biggest weapon against the Gators on Thursday seems to be junior Forward Moses Kingsley. In addition to Second Team All-SEC Honors, Kingsley was named to the league’s All-Defensive Team Tuesday afternoon.  The 6’10” Nigerian averages 16.1 point per game, 9.2 rebounds per game, and 9.2 blockers per game.

“[Kingsley] has tremendous instincts … he’s long, he’s athletic, he’s pretty agile … Around the basket, I think he has the length and the strength … [He] is an outstanding defensive player and one of the top shot blockers in our league,” said Anderson.

The Razorbacks also have Anthlon Bell, a 6’3″ senior Guard from Memphis, TN.  Bell averages almost 16 points a games and 85 percent from the free throw line.

On paper, Arkansas seems to have an advantage over Florida in points per game, rebounds, three point shots, and free throw percentage.  The largest advantage seems to come in the Razorbacks’ ability to hit their three pointers nearly 40 percent of the time, where as Florida is only able to convert about 31 percent of them.

Florida head coach Mike White’s first season with the Gators ended with an 18-13 record.  The Gators lost four of their last five regular season games, but ended with a win over Missouri last Saturday.

The winner of the Arkansas-Florida match up will face the no. 1 tournament seed, Texas A&M, on Friday at 1 P.M. ET.  Coverage will be on SEC Network.

Coverage: The Razorbacks will take on the Gators on Thursday at the Bridgestone Arena in Memphis, TN.  Coverage will begin at 1 p.m. on SEC Network. The game can be heard as always on ESPN Gainesville 95.3 FM with coverage starting at 12:25 p.m. Mick Hubert and Mark Wise are on the call.

@amandagolf59
Previous Gators’ Chiozza Looking Forward to Arkansas, SEC Tournament
Next With Callaway Out, Who’s Next?

After releasing its non-conference schedule over the summer, the Florida Gators men’s basketball team released …