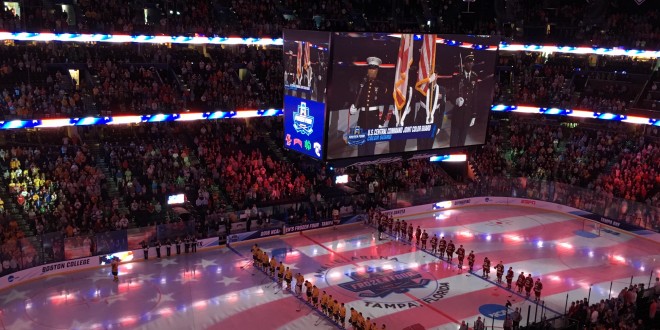 In the nightcap North Dakota and Denver put on a show for the 18,037 fans in attendance in a rematch of the 2005 national championship.  The two schools are very successful hockey programs and have seven national championships each and this battle between two hockey heavyweights did not disappoint. After withering away a 2-0 lead, North Dakota’s Nick Schmaltz punched his team’s ticket to the national title game with a rebound goal as the clock showed 56.8 seconds left in the game. An empty netter gave the Fighting Hawks a 4-2 victory and some sweet revenge after their 2005 finals loss to the Pioneers.

In front of a well-traveled North Dakota crowd, the Fighting Hawks delivered late. Thousands of fans in green went silent when Matt VanVoorhis’s centering pass deflected off UND’s captain Gage Ausmus’ stick and into the net, tying the game at 2-2 with 9:09 remaining.

After a first period that was almost even in every stat, North Dakota started to separate themselves in the second. Drake Caggiula slotted one just over a minute into the period, and then five minutes later Caggiula went top shelf and found the cookie jar. The senior forward skated in unassisted and sniped one in the top left corner past goalie Tanner Jaillet to give UND a 2-0 lead.

It’s over right? In the last three years, North Dakota was 69-0-5 when leading after two periods.

The Pioneers woke up, scoring two goals in 10 minutes to start the third and it was all tied up. After killing off a questionable two-minute minor given to UND’s Trevor Olsen for an elbowing that looked like it might be a five-minute major, North Dakota did something that had been plaguing them all night; they won a faceoff in the attacking zone.

It was then that Chicago Blackhawks prospect Nick Schmaltz found the pass from Brock Boeser and slipped the puck into the net with the backhand. The Fighting Hawk faithful roared in Amalie Arena, and an empty net goal from Rhett Gardner with 1.8 seconds remaining sealed it for North Dakota, sending them to their 12th national championship game, first since 2005 when they lost to Denver 4-1.

Nick Schmaltz, the hero for North Dakota, was humble in the postgame press conference and talked about it being a team win.

North Dakota goalie Cam Johnson, a finalist for the Mike Richter Award, given to the top goalie, finished with 21 saves and two goals allowed.

Coach Brad Berry spoke about how vital blocking shots were in the penalty kill situations.

Berry will try to become the only first-year head coach to claim the NCAA national title.

In a game that exhibited the exact same amount of shots by each team in each period (4,9,10), it was only fitting that it end with a “buzzer-beater.”

North Dakota will attempt to take home their eighth national title, which would put them alone in second all-time, behind Michigan (9).

The first semi-final started mainly blue and gold as No. 1 Quinnipiac jumped out to an early 2-0 lead after only eight minutes, and then snuffed a second period rally by Boston College as the Bobcats made it 3-1 on a power play goal scored four minutes after the Eagles made it 2-1. Once the third period started, that two goal lead held up until Boston College connected on a power play goal with under five minutes left to make it 3-2.

As dominant as Quinnipiac was early, Boston College kept coming on and it took a pair of unbelievable saves by Quinnipiac goalie Michael Garteig to secure the win and a berth in the national championship game for the Bobcats.  The moment of the game occurred when Garteig, a senior who had 34 saves on the night, made a last second deflection with his glove on a shot in the top right corner by BC defenseman Ian McCoshen.

Quinnipiac head coach Rand Pecknold could not stop giving praise to his netminder.

Quinnipiac committed six penalties, and the Eagles could only take advantage of it once with a power play goal with 4:16 left in the game to pull within one. Garteig made three saves in the last 1:20 while Boston College had a 6-5 advantage with the goalie pulled.

Boston College head coach Jerry York spoke about the early deficit and gave a lot of credit to Quinnipiac.

The Bobcats advance to their second ever championship game; they lost to Yale 4-0 in the 2013 finals, and will look to take home the program’s first national championship behind newly crowned Coach of the Year Rand Pecknold.

Quinnipiac has a chance to become the fourth consecutive team to win the NCAA title for the first time in school history following Providence (2015), Union (2014), and Yale (2013).

North Dakota has met Quinnipiac three times previously, with North Dakota winning all three games, including a 4-1 win in the first round of the 2015 NCAA Tournament.

Although the season may be over for Boston College goalie Thatcher Demko, who allowed three goals on 30 shots, is a finalist for both the Hobey Baker Memorial Award, given to the top hockey player, and joins UND’s Cam Johnson as a finalist for the Mike Richter Award.

The Hobey Baker Memorial Award ceremony will begin at 5 p.m. Friday, April 8 at the Tampa Theater on NHL Network, and the Mike Richter Award ceremony after at 7 p.m. at Champions Sports Bar in Tampa.

The national championship game will be Saturday night at 8 p.m. at Amalie Arena, with the broadcast on ESPN2.