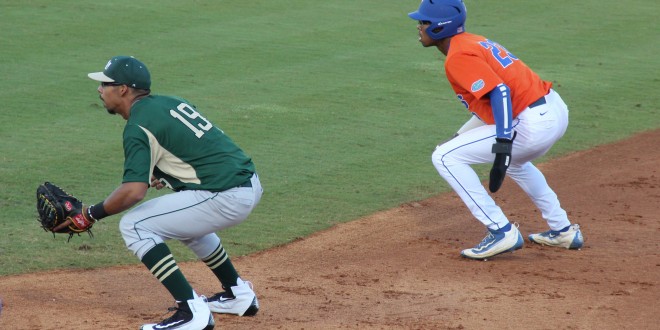 The second ranked Florida baseball team improved its record to 34-5 after defeating the Jacksonville Dolphins (22-14) 3-1 Tuesday night in Gainesville.  This is just the sixth time this season the Gators have scored three runs or less. They are 3-2 in those contests.

Florida is now 22-1 in non-conference play this season, and 12-0 in mid-week games. Head Coach Kevin O’Sullivan says depth in the bullpen helps during the week.

Hitting was at a  premium in this game but it didn’t appear that way in the first inning. Jacksonville’s Austin Hays hit his 13th home run of the season off of Jackson Kowar giving the Dolphins the early 1-0 lead. Kowar gave up just the one run, but allowed five hits through just three innings of work.

The Gators tied the game in the fourth inning 4th on a past ball that scored Buddy Reed. Florida finally broke the tie in the sixth inning on a groundout from Mike Rivera that scored Reed who reached on an error to start the inning.  Reed says his team finds ways to win when the bats aren’t hot. The Gators added an insurance in the seventh when Jonathan India hit an RBI single to left field.

Florida struggled with runners in scoring position, going just 1 for 13 (.077) and stranding eight runners on base.

Frank Rubio (3-0) got the win in relief of Kowar, throwing a scoreless 3.2 innings while giving up only two hits. Kirby Snead, Dane Dunning, and Shaun Anderson closed the game out for the Gators with Anderson earning his eighth save of the season. Florida’s pitchers combined for 10 strikeouts and no walks.

Up next the Gators host Georgia for a three game series this Thursday. Reed knows the Bulldogs will be a tough match up for Florida. The Orange and Blue are 23-2 at home this season and O’Sullivan credits the crowd for some of the success. First pitch on Thursday is set for 7:30 P.M.

Im a senior at the University of Florida currently pursuing a degree in Telecommunications. I work for ESPN Gainesville 95.3 and anchor the Monday sports broadcast for WUFT First At Five. Im from New York and an avid sports fan of all New York teams.
Previous Preview: Gators Lacrosse Travels to Cincy for First Time to Face Bearcats
Next Current NFL Player Trenton Brown Pursuing College Degree