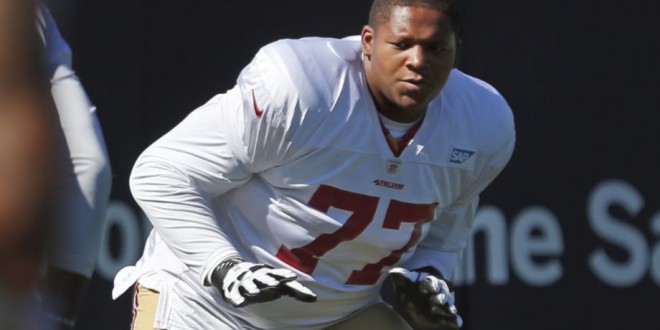 Trenton Brown… some know him as an offensive tackle, others as a big kid with a kind heart and a sense of humor. Nicknamed Trent by his family and friends the young NFL player with a bright future is so much more.

Professional athletes are highly esteemed and looked up to by many because of their athletic prowess and demeanor. Very few truly fit the mold of a perfect role model for today’s youth. Brown most definitely does. The former Florida Gator tirelessly worked for everything he has accomplished, taking nothing for granted. He took the road less traveled having played for the Georgia Military College for two years prior to joining the Orange and Blue. Coming out of high school and playing for a junior college added a much larger chip on his shoulder and helped fuel him as a Gator.

In the football world his strength and size have been widely advertised. Standing at 6’8″ and 355 pounds the San Francisco 49er played in five games last season, starting two.  There is room to grow and improve but there seems to be no limit to what this gentleman can do on the gridiron.

While his athletic ability speaks for itself, another side of Brown, the scholarly side, needs to discussed too.  Prior to leaving Florida for the draft the standout promised himself that he will earn his college diploma. While many NFL stars spend their off-season living the high life, Brown is going back to school.

The list of possible things Brown can do over the summer is endless but completing his degree tops the list. Many players leave for the draft early promising themselves and their families to one day return for their diploma. Some do, some do not. Being a man of his word was something instilled in Brown at an early age by his father who is a police officer and his best friend.

Sadly, we live in a society where the mainstream media sometimes is more concerned with documenting athlete missteps rather than shining a bright light on those who young children should aspire to be like. Brown sets an example for kids all over the country on the importance of education. So much that, even after reaching the pinnacle of football, receiving an education is still paramount to him.

Trenton Brown, an African-American athlete, is fulfilling a promise to get his college education and be ready for what life has to offer after football, helping to put to rest the notion that athletes just care about sports and not their education.

Trenton Brown, scholar in the classroom, and an improving player on the football field with a bright future in both areas.

Previous Gators Sweep Series Against Jacksonville With Tight Win
Next Nationals Get Revenge on Marlins, Win 7-0