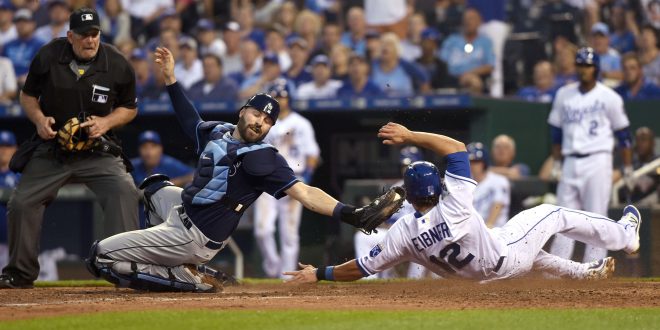 Rays Look to Avoid Sweep in Series Finale Against Royals

The Kansas City Royals (29-22) will be looking for their sixth straight victory tonight as they try to complete the sweep over the Tampa Bay Rays (22-28).

The previous two games between these teams ended 6-2 and 10-5 respectively in Royals victories. Royals Eric Hosmer had a three-run homer to put the game out of reach in Game 1 and both Lorenzo Cain and Kendrys Morales had two-run homers in Game 2. All Royals batters recorded a hit in their latest win and Hosmer is now 13-for-21 with 12 RBIs and two runs in the Royals homestand.

Rays manager Kevin Cash talked about the frustration that comes from being unable to catch a break. The team has lost nine of the last 11 and the offense will be looking for a turnaround after hitting only .250 over the series.

Chris Archer (3-6, 4.62 ERA) will start on the mound tonight for the Rays. It will be his 12th start of the season and he will be looking for his first win in Kansas City where he is 0-2 with a 6.27 ERA in three career starts. Left-hander Danny Duffy (0-0, 3.23 ERA) will start for the Royals and will look to rebound from his last start in which he ended with five straight hits and five runs.

Royals left-fielder Brett Eibner will not be available tonight after he was carted off the field in the last game and diagnosed with a left lateral sprain. Royals manager Ned Yost indicated he would be moved to the disabled list. Rays pitcher Brad Boxberger was also injured after he suffered a strained muscle in his left side. His status is unknown after he was taken out of the game in his first appearance since coming off the disabled list.