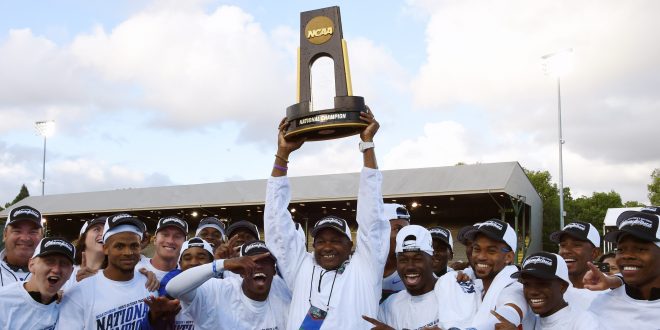 Later when the Gators left the NCAA East Preliminary in Jacksonville, the team had 12 national championship entries. That’s when the team and Holloway saw the potential emerging.

Senior and captain, Arman Hall, become the second Gator in history to win the 400 meters title crossing in a speedway of 44.82 seconds to match the fastest time of his career.

While teammates Najee Glass and Kunle Fasasi took fifth and seventh in the 400 meters final, all adding up to 16 points in a matter of 46 seconds. Later, sophomore KeAndre Bates, was getting ready for his fourth attempt in the triple jump, which then helped Florida move up in the team standings. Bates became the second Gator and sixth man since 1990 to score in both the long jump and triple jump as an underclassman.

Moments after the jump, Eric Futch and TJ Holmes became just the second pair of Division I teammates since 1983 to post a 1-2 finish in the 400-meter hurdles, piling up 18 more points for the team.

With Glass’ 400 meters score being disqualified due to a lane violation, the team needed him to anchor the 4×400 relay, the meet’s final event, with the national championship on the line. Even without Glass’s points the team still needed a sixth place finish to win the team title. The Gators were able to pass the finish line with a second place finish, making it the teams sixth national title.