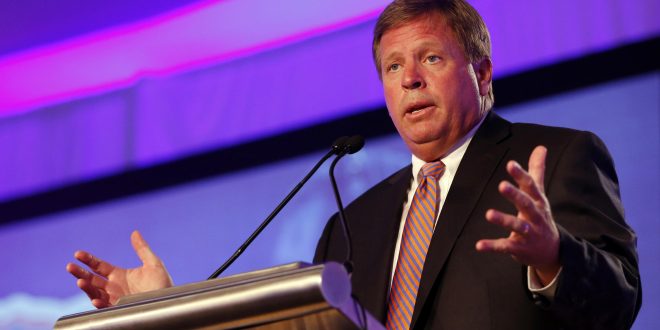 SEC Media Days kicked off in Hoover, Alabama today where all 14 head coaches are scheduled to speak this week. Florida head coach Jim McElwain was second at the podium, and provided a thorough update on how the Gators are looking heading into the 2016 season.

In hindsight, the ups and downs of McElwain’s first season coaching at Florida are still fresh in his mind. He had an impressive 10-4 record, but is disappointed with the results of the SEC Championship Game and the way his team ended its season.

The coveted starting quarterback position is still up for grabs; big contenders include transfers Luke Del Rio and Austin Appleby, as well as freshmen Feleipe Franks and Kyle Trask. McElwain did not say who is going to start Week 1, but said that it is all about which guy elevates the players around him.

"It's a position I'm really excited about."@CoachMcElwain on the #Gators quarterbacks. pic.twitter.com/bKb6H2X6db

Injuries seem to be improving on schedule and he is optimistic that linebacker Alex Anzelone, offensive tackle Martez Ivey, and running back Brandon Powell won’t miss any play time.

As far as the new faces on the field, McElwain is extremely impressed on how the Gator veterans have mentored the newbies. And speaking of newbies, he believes the spring training that the 13 mid-year enrollees experienced gives them and the Gators a big advantage heading into the season.

Coach McElwain also discussed how he believes the offensive line play need to get better but overall he believes his football team will be an improved group.

An additional interesting point McElwain touched upon was his players and their social media usage. He maintains that he’s not there to censure his players, but hopes they can use media outlets such as Twitter and Instagram in a positive way.

Florida will open its 2016 season when it takes on the Massachusetts Minutemen in the Swamp on September 3rd.