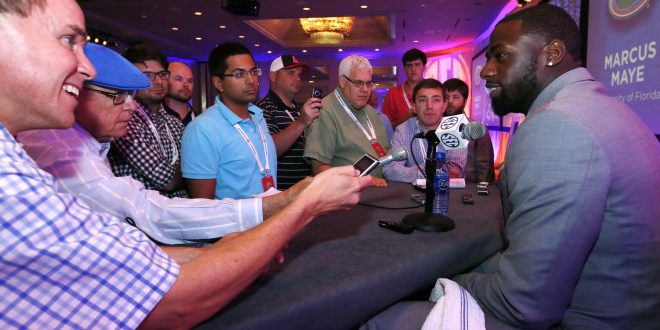 The arrival of the SEC Football Media Days is the unofficial start of college football. Florida, Vanderbilt and Auburn opened up the festivities and the Gators were represented by head coach Jim McElwain along with players linebacker Jarrad Davis, safety Marcus Maye, and offensive lineman David Sharpe.

Listen to this message … JD out there preaching!@CoachMcElwain and his staff are molding some great young men. pic.twitter.com/xkrpsPLBTe

There are a lot of new faces with the Gators this year, but the there are three upperclassmen who are looking to leave their marks. Both Davis and Maye are entering their senior years while Sharpe is entering his junior year. McElwain noted how Davis and Maye chose to come back and help lead the team. Maye also chimed in, saying that even though Vernon Hargreaves III is no longer on the team the secondary is still going to maintain its elite status.

McElwain also said that Sharpe’s experience helps the younger players on the offensive line. Some of those young players have been early enrollees and some will join the team in the fall.

But the hope is that these veteran players will help the Gators achieve a successful season, on and off the field.

Senior telecommunication and history major at the University of Florida and contributor for ESPN Gainesville 95.3. Baseball and hockey are my favorites, but I love all sports.
@MichelleSpring6
Previous Auburn Tigers First Team Up at SEC Media Days
Next McElwain And Gators Hit SEC Media Days