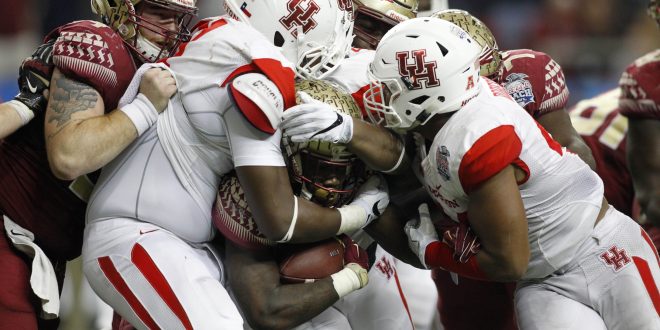 College football is only getting started but there are no shortage of important games in the very first week.

One of only four games this week where two top 25 teams square off, Oklahoma is looking to build upon a campaign that saw them lose to Clemson in the College Football Playoff Semifinals last season. Leading the charge is quarterback Baker Mayfield, who finished fourth in Heisman Trophy voting. The 6-foot-1 signal caller passed for a whopping 3,700 yards last season with 36 touchdowns, and he’ll need all that firepower for a tough road match up. The Cougars finished last season 13-1 and capped their season with a win over FSU in the Peach Bowl. Sooner coach Bob Stoops knows it’s going to be tough to take on a team that has won its last eight games at home. OU’s key to avoiding a first-week upset is keeping Houston QB Greg Ward Jr. in check. The dual-threat QB can’t be allowed to stretch his legs like he did in 2015 when he rushed for 1,108 yards to go with 2,828 yards in the air.

Entering last season, the Buckeyes weren’t sure who was going to step up in the QB position. This year, head coach Urban Meyer says J.T. Barrett has the keys to the car and he’s been really impressed with his preseason work. The junior had a sporadic workload last year, but is in charge of leading his team to a playoff berth, something Ohio State felt it deserved after an 11-1 regular season. Bowling Green, under new head coach Mike Jinks, look to play the spoiler. The Falcons finished last year 10-3 and Mid-American Conference champions. These two teams last met in 2006, where the Buckeyes took home the victory and made it 4-0 all-time against the Falcons.

This is what it's like to be J.T. Barrett on Kickoff Week at Ohio State. The Buckeyes QB… https://t.co/4wDkWXHHxl pic.twitter.com/3FbY1m3ehH

Few teams had as embarrassing a season as Texas last year. Stumbling to a 5-7 season, the Longhorns suffered blowouts against TCU (50-7), Iowa State (24-0) and Notre Dame (38-3). The Fighting Irish hope for déjà vu where they finished last season 10-3. The key to a victory might simply be scoring first. Texas is 0-11 when their opponent jumps ahead first. Irishcoach Brian Kelly says the stage is all theirs on Sunday and his team is ready to take advantage. The biggest question looming for his team is the receiving situation. C.J. Prosise, now with the Seattle Seahawks, was the primary target last season. Torii Hunter Jr. is the only proven commodity and it’ll be up to Texas to exploit that.

Get ready for Sunday night's game against Notre Dame with this week's facts and figures #HookEm #Believe pic.twitter.com/m01y8zoxoT

Like Notre Dame and Texas, this match up has its own stage and out of every game this week, it might be the most highly anticipated. FSU is an oft-mentioned favorite for a national championship this year led by Heisman hopeful running back Dalvin Cook. Meeting in a neutral site (although its only a four-hour drive for FSU as opposed to 11 hours for Ole Miss), the Seminoles will ride new red shirt freshman QB Deondre Francois into the season against a tough Ole Miss team that finished 10-3 last season with a win in the Sugar Bowl. The Rebels will rely on senior QB Chad Kelly to get on the board, but it’s really up to the defense to stop Cook if they want a shot at an upset. Seminole head coach Jimbo Fisher says his team is simply happy they get to stop playing themselves.