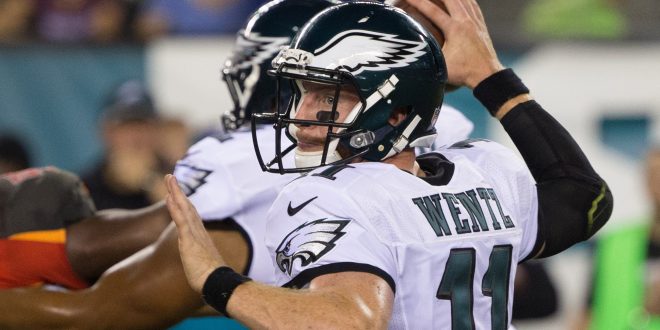 Sunday’s news that Sam Bradford was headed to Minnesota in exchange for a 2017 first round pick and a conditional fourth round pick in 2018 meant that the Philadelphia Eagles’ starting quarterback spot was open.

On Monday, Carson Wentz, the second overall selection in the 2016 NFL Draft, was just hanging out when he got the call that he would be named the starter.

Wentz, born in Bismark, North Dakota, played college ball at FCS powerhouse North Dakota State, and was actually laying in a cornfield when he found out the news. Now the 23-year-old who was the back-to-back NCAA Division I-AA Championship Game Most Outstanding Player will try to lead his team to their first playoff appearance since 2013.

As a Bison, Carson Wentz threw for over 5,000 yards, with 45 touchdowns and 14 interceptions. Analysts projected for him to go mid-first round, and now he’ll be a starting QB in the NFL while No. 1 overall pick Jared Goff looks like he will be the third QB in Los Angeles. Wentz joins fourth round pick Dak Prescott as the two rookie starting quarterbacks this upcoming season.

He will also be the first rookie QB in Eagles history to start a season opener. On top of that, Wentz only played one preseason game for Philadelphia, the first one on August 11. In his first and only game before starting this Sunday against Cleveland, Wentz was 12/24 for 89 yards and an interception.

Coach Pederson: This is why we drafted Carson Wentz. He's ready to go. #FlyEaglesFly pic.twitter.com/ohcYZjeHWo

Previous UCF Knights Hope to Have a New Armor in Upcoming Travels to Ann Arbor
Next No.5 Florida Soccer Opens Up SEC Play Thursday