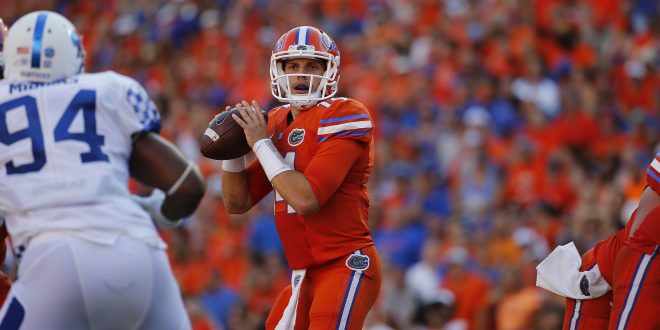 Preview: No.23 Florida vs North Texas

After a showcasing dominant offense and defense against Kentucky, the Florida Gators had to feel good about themselves.

Quarterback Luke Del Rio was able to find his receivers deeper down the field than the previous week against UMass, and the offensive line was able to push the Wildcats’ defensive front to create space for the running game.

And with the return of cornerback Jalen Tabor, the defense looked and played much more comfortably. They intercepted quarterback Drew Barker three times and held the offense to paltry 149 total yards— everything was clicking for the Gators.

But that doesn’t mean that the players can get comfortable going into a game against a North Texas team that has struggled as of late. Florida head coach Jim McElwain believes that there always must be a sense of urgency, no matter what opponent is played.

And he has good reason to think so. Florida itself struggled in its opening game against a UMass team that wasn’t regarded as “good” by many. Four top-25 teams were upset in week one alone.

And North Texas is a team that can surprise. After a disastrous 1-11 season that saw two coaching changes, the Mean Green hired a new head coach in Seth Littrell, who came over from North Carolina after serving a year as the associate head coach and tight end coach. And after dropping their home opener against SMU, North Texas picked up the offense in their second game against Bethune-Cookman, posting 41 points and rushing for 329 yards.

The Mean Green started freshman quarterback Mason Fine, and in his first action, he held his own. Although he only threw for 108 yards on the night, Fine showed how he can use his legs to create offense. On eight carries, the quarterback rushed for 54 yards, including a 25-yard run.

Littrell still wants to play his other quarterback, Alec Morris, during the duel. He believes that both quarterbacks seeing the game from the side of the field will prove a good learning experience.

The Mean Green defense also can’t be overlooked, with players such as linebacker Courtney Finney and safety Kishawn McClain providing sparks for the team with a combined 21 tackles over the first two games. While North Texas may not house huge names, the Gators must be weary of a unit that has the ability to perform.

The Gators are trying to eliminate any thoughts of this being an overlooked game. Quarterback Luke Del Rio is looking towards the amount of enthusiasm and tenacity the team comes out with, regardless of the opponent.

The game will be looked at as a chance to grow by both teams, whether that be a big game against an SEC powerhouse, or a test against a small conference opponent.

Both will look to grow, but only one will reap the benefits of victory.