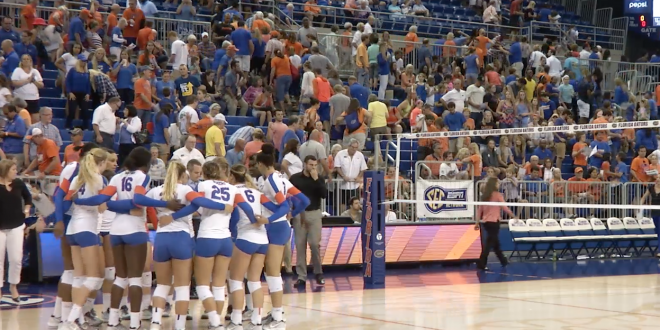 Saturday afternoon’s match against Marshall was the final match for the Gators in the Active Ankle Challenge. The first set of the match went to the Thundering Herd, but the Gators quickly turned the game around and didn’t drop another set. Carli Snyder left the court with both a team high and career high 21 kills and just as many points.

Snyder wasn’t alone, though. Alex Holston and Rhamat Alhassan added on kills of their own–Holston with 17 and Alhassan with 13. By the end of the match, the three veterans contributed 60 of the team’s 75 points.

Alhassan, Holston, and Snyder were all named to the Active Ankle Challenge’s All-Tournament Team.

For Florida Head Coach Mary Wise, those three played like the best of the best in Saturday’s match.

The Gators played defense just as well as they played offense Saturday afternoon. Three Gators made it into the double digits in digs against Marshall. Junior libero Caroline Knop and redshirt sophomore setter Allie Monserez hit the floor for 12 digs each, with freshman Allie Gregory adding in 10 of her own. Florida left the floor with 52 digs against the Thunder Herd’s 55.

#Gators had to battle it out today, but what a great way to end the 'preseason' before heading into @SEC play! pic.twitter.com/D6IAOClcct

With 11 games behind them, the Gators have a few days of practice in front of them before they open SEC play against Ole Miss Friday evening.

Holston believes the team is ready to open up conference play thanks to the past 11 games.

The Gators take the court in Oxford Mississippi against Ole Miss at 7:30 pm. 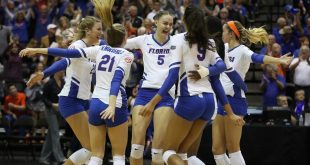