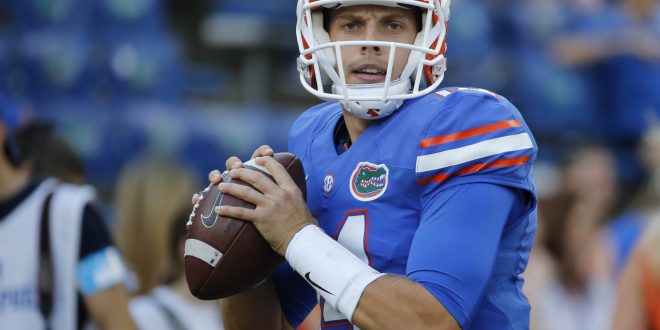 Gator Football Injury Update As They Prepare for Vanderbilt

Florida Gator football head coach Jim McElwain provided an update Wednesday on injuries on his team as they prepare to play Vanderbilt in Nashville on Saturday.  The Gators are looking to bounce back with a win after a crushing defeat from the Tennessee Volunteers last weekend that left the Gators seeking answers to many questions as to why the team unraveled like it did in the second half of the game.

Real test is how you handle yourself when things don't go well.

Quarterback Luke Del Rio has been dealing with a sprained MCL the past two weeks but McElwian had him in full pads for practice on Wednesday with no contact. Del Rio has now been moved from doubtful to questionable to play for this weekend’s game.  He threw some passes and did some light work but McElwain now says he has gone from doubtful to questionable for the game this weekend.  He even said Del Rio could be used as a second option if something were to happen to the current starter, Austin Appleby.

A major blow to the Gator defense for most of the remaining season is the loss of nose tackle Joey Ivie. McElwain said Ivie will be gone four to five weeks due to a thumb injury. Ivey played well the first four games of the season and will be a loss for the Gators. He had nine tackles, two quarterback hurries and a shared sack so far this season.  McElwain stated that his thumb was being “worked on” and hinted towards surgery. To hear McElwain’s full injury report for this week click here.

Mac said DT Joey Ivie had hand surgery is out for 4-5 weeks.

With Ivie out, McElwain said other players would have to step up inside with guys like Ce Ce Jefferson, Caleb Brantley and Jachai Polite perhaps playing more there.

Florida got some good news Wednesday when the SEC ruled that wide receiver Brandon Powell will not be suspended for the first half of the Vanderbilt game after he was ejected for allegedly throwing a punch during last week’s Tennessee game.   Video replays showed Powell did not do that and the league ruled he is free to play.

Our live coverage of Florida at Vanderbilt this Saturday starts at 8 am with the First And Ten pregame show.  Kickoff will be at noon eastern time.

@@ashlynrsullivan
Previous Kentucky Sweeps No. 5 Gator Volleyball
Next Preview: Revenge Would Be Sweet for Houston Against UConn