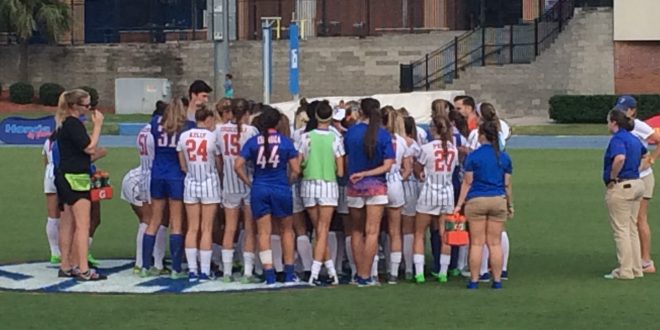 The Florida Gator soccer team huddles before the second half of the match against Tennessee on September 25, 2016.

In a tough-fought battle against unbeaten South Carolina, the Gator soccer team lost 1-0 to the Gamecocks in double overtime. The game was played in Columbia, South Carolina on Sunday.

The lone goal was scored on a penalty kick in the 103rd minute of play by senior Chelsea Drennan. After a backwards pass from Savannah McCaskill to Drennan in the box, Florida defenders Kristen Cardano and Julia Lester went in to kick the ball away. A penalty was called against Florida. Drennan put the penalty kick in the upper left corner of the goal, out of reach of goalkeeper Kaylan Marckese.

Tough way to end a hard-fought match but you just have to trust your journey! pic.twitter.com/0PYcRTIT5P

The match was physical for both teams throughout play and both teams had several chances to score but to no avail. Marckese had six saves in the match compared to South Carolina’s goalkeeper Mikayla Krzeczowski’s four saves. Savannah Jordan led Florida with two shots on goal and Mayra Pelayo had a shot in the first half that hit off the cross bar.

Florida is 10-4 and 5-3 in the SEC which puts them in fifth place in the league. The win for the Gamecocks keeps them unbeaten and at the top of the SEC standings with a record of 14-0-1 and 8-0 in the league.

Previous Preview: Jaguars Visit Chicago to Take on Bears
Next Jags Come Back To Beat Bears