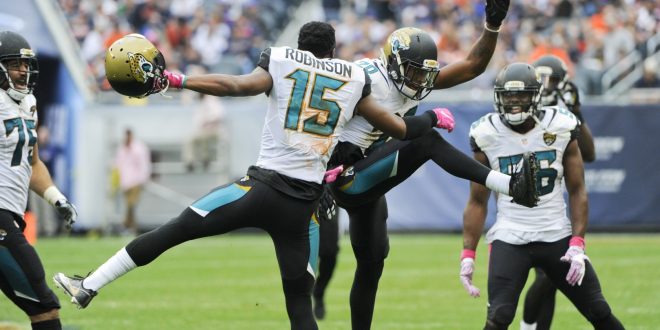 Jags Come Back To Beat Bears

When it looked like the Jacksonville Jaguars were going to lose another game, they came up big late in the fourth quarter to overcome the Bears 17-16 Sunday in Chicago.

From the start of the game, both teams didn’t look well and didn’t score in the first quarter and it wasn’t until the second quarter where there were points on the board from a Chicago Bears field goal. The Bears would then go on a 10-0 run after that field goal to make it 13-0.

It wasn’t until the fourth quarter that the Jaguars put up points. Jags coach Gus Bradley says his team in the first half did not play to their expectations.

The Jaguars first points on the board came from a one yard TD run by Chris Ivory. Ivory finished the game with 11 carries for 32 yards.

Like the Jags, quarterback Blake Bortles started off slow then finished strong. He threw an interception in the first quarter then connected with wide receiver Arrelious Benn for a touchdown in the fourth quarter that would put the Jaguars up for their first lead of the game.

Wide receiver Allen Hurns led the team with five receptions for 74 yards, but it was Benn who came up big for the Jags after taking it to the house when the Bears defense failed to keep him down.

The Bears had a chance to score again with a little less than three minutes left. Chicago would pass midfield and faced a fourth and 10 with a minute left to continue the scoring drive.  Bears quarterback Brian Hoyer tried connecting with wide receiver Alshon Jeffrey, but Jags cornerback Jalen Ramsey broke up the play to secure the W for Jacksonville.

After starting the season on a three game losing streak, the Jags are now on a two game winning streak and will next face the Oakland Raiders at home Sunday for a 1 pm game.