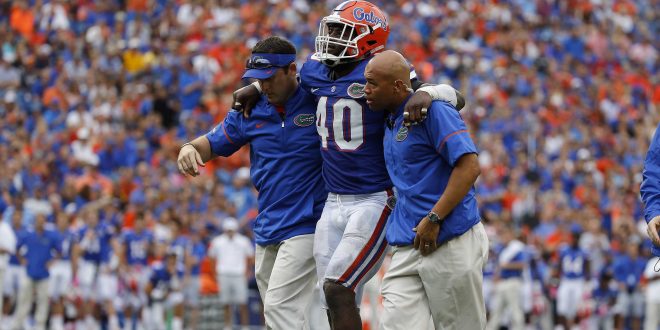 Coach McElwain said the down time should help the team recover from some injuries.

The Gators have a few players in rehab-mode trying to recuperate before the Florida-Georgia rivalry game. LB Jarrad Davis has a sprained ankle but is working to make a full recovery as soon as possible. Coach McElwain said if any player can get back quickly, it’s Davis.

Injury Update: Jarrad Davis has a badly sprained ankle and there is no timetable for his return. #Gators

Senior defensive end Bryan Cox Jr. suffered a thumb injury in pre-game warmups before the Missouri game. Coach McElwain said there is a chance he will not return in what is his fifth and final season with the Gators.

Running back Jordan Cronkrite and tight end DeAndre Goolsby are also not practicing this week. Cronkrite hurt his leg early on in their last game againt Missouri. Goolsby is dealing with an injured hand and McElwain said that Goolsby’s injury should not keep him out for long but it is “another case where it has to be right through the doctors and him mentally.”

Meanwhile, defensive linemen Joey Ivie and Jordan Sherit are still out and their status is to be determined. Ivie has a cast on his thumb and will have a medical evaluation later in the week. Sherit did come out to practice in shorts on Tuesday, but Coach McElwain thinks he is still a week out from a full recovery.

The bye week is giving players time to heal which will help the team in their next game against Georgia. Coach McElwain said he will never play an injured player and put them at risk.