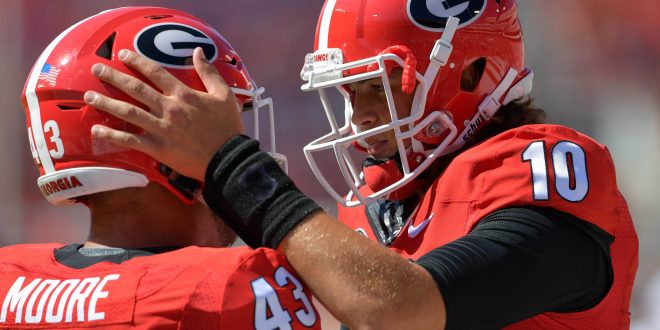 The Georgia Bulldogs will use their Week 9 bye to focus on improvements before facing Florida.

Early in the season, Georgia (4-3) looked like a team entering a new era… a Smart era nonetheless.  However, the Bulldogs haven’t mirrored their early-season success as the season has progressed.

The Season So Far

Georgia head coach Kirby Smart left Alabama as the defensive coordinator in 2015 and came to Athens ready to win in early 2016.  The Dawgs went 3-0 in their first three weeks of play, and had a ranking as high as 9th in the AP Top 25 Poll entering Week 2.

By week 6, UGA had fallen out of the top 25 after losses to Ole Miss and Tennessee in consecutive weeks.

Georgia thought weeks 7 and 8 would be easier, playing SEC East rivals South Carolina (2-4) and Vanderbilt (3-4).  Although South Carolina was indeed a cake walk, Vanderbilt stunned the Dawgs 17-16. Ultimately, UGA took three losses in their last four weeks of play before this Week 9 bye.

10.  Before the Dawgs and Gators meet in Jacksonville in the “world’s biggest cocktail party”, Smart says he will focus on improving special teams.

Georgia’s offense will need to bring its A-game to EverBank Field  since Florida’s defense is ranked 3rd in the NCAA and will prove to be a challenge for the Bulldogs, as Smarts tells reporters here.

Georgia’s defense, meanwhile, could be missing two starting inside linebackers come Week 10.  Natrez Patrick and Roquan Smith had a run-in with police last weekend just hours after their loss to Vanderbilt.  A resident assistant reported smelling marijuana coming from Patrick’s dorm room.  However, Patrick’s dorm room “produced no marijuana of testable quantity”, according to police reports.

Neither Patrick nor Smith were arrested in the incident, but it is still unclear how UGA will proceed with disciplinary measures.

Georgia’s starting quarterback, freshman Jacob Eason, has been a leader on the team this year.  The 18-year-old boasts a massive 6’5″, 235-pound frame and an arm to go along with it.  In Week 8 against Vanderbilt, Eason went 27-for-40, threw for a career-high 346 yards and a touchdown.  He was also able to spread the ball out to nine different receivers.

However, Eason did have a few hiccups, most notably in the 3rd quarter. Eason missed a wide-open Jayson Stanley along the sideline who would’ve had an open run to the end zone.

Although a lot of focus in the off-week will be on special teams, Smart says offense is another place that needs improvement, including Eason.  Smart discusses Eason’s off week plans here.

Another player to look out for is star tailback Nick Chubb.  Chubb entered the season rehabbing a knee injury.  The 5’10” junior tallied 40 yards on 16 carries in last week’s game against Vanderbilt.

Georgia needs a healthy Nick Chubb, along with running back Sony Michels and cornerback Deandre Baker to be at full strenght.  Michels, like Chubbs, came into the season nursing an injury.  Baker, on the other hand, became the starting cornerback in Week 7.  Unfortunately for the Dawgs and adoring fans alike, Baker suffered an injury before the Vanderbilt game.

If the Dawgs can get those three healthy against Florida, they will have a better chance of taking down the elite Florida defense.

As Smart discussed, Eason will need to work on his arm and other aspects before the October 30th game.  The freshman quarterback needs consistency on his side as well as receivers that’ll help him.

Florida is a better team on paper and on tape.  A strong defense in addition to quarterback Luke Del Rio’s smart play have led the Gators to a 5-1 record on the season.  Georgia started the season well but has since dwindled in recent weeks.  Interestingly, both teams have this week off.  Georgia especially needs to work on improving their special teams and offense.  Smart also needs to make sure some of his best players are healthy and ready for the game.  Georgia has nothing lose against Florida and will need to come out swinging.