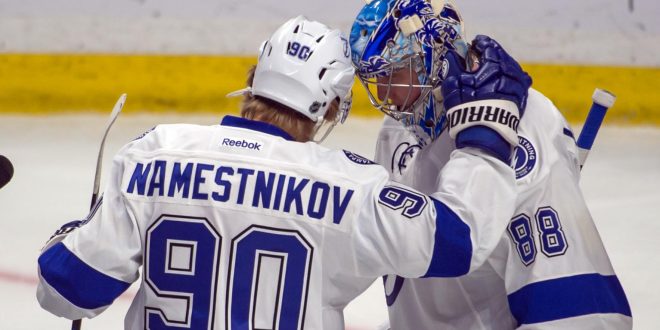 NHL Preview: Lightning On The Road At Toronto

The Tampa Bay Lightning travel to Toronto to take on the Maple Leafs tonight.

This game follows Tampa Bay’s 4-1 victory over Ottawa over the weekend, and marks their second game in a six-game, 11-day road trip. This year’s game at Toronto is slightly different from last year’s for Lightning Captain Steven Stamkos. Last year was Stamkos’ final year of his contract with Tampa Bay, and many expected him to come back to his hometown of Toronto and play. However, the captain stayed true to the team that he’s played for since the age of 18 and resigned another 8-year contract in June.  So far, it seems his decision to stay isn’t one of regret. The centre has had three goals and two assists five games into the 2016-2017 season.

Appearing for goalie in the Lightning net is likely to be Ben Bishop, who is 2-1-0 with an .861 save percentage. Twenty-seven-year-old Frederick Andersen starts in Toronto’s net. He is 1-0-2 in three starts this season with an .879 save percentage.

The Maple Leafs are currently 1-1-3. After a 4-1 win over Boston in mid-October, Toronto has fallen in three straight away games in Winnipeg, Minnesota and Chicago. Tonight’s face-off marks their opening home game of the season.

Cooper: "It doesn't matter who's going in net, if it's your turn you go in and do your best. Our guys push each other." #TBLvsTOR pic.twitter.com/aFTOiomwPr

The Lightning will hope to raise their standing in the Atlantic Division and make their record 5-1 tonight. The puck drops at 7:30 p.m.