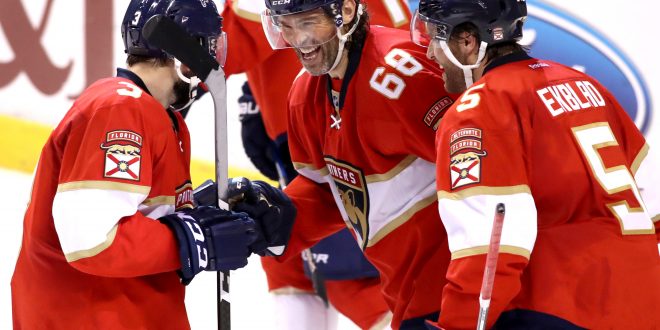 Both the Panthers and the Penguins enter Tuesday night’s game with seven points, Florida (3-1-1) is coming off a 5-2 win at home against Colorado while Pittsburgh (3-2-1) will be home trying to bounce back from a 5-1 thrashing by Nashville.

The game tonight is the beginning of four straight away games for the Panthers, whose losses have both been to 2015 playoff teams (Tampa Bay, Washington). After taking on the defending champion Penguins, Florida travels to Toronto on Thursday, Buffalo on Saturday, and Detroit on Sunday. Four road games in six days for the Panthers.

Jaromir Jagr, 44 years of age, returns to Pittsburgh, a place where he won two Stanley Cups — Pittsburgh’s first two championships in 1991 and 1992.

We may also see Sidney Crosby in action for the first time this season.

Crosby, a two-time MVP, 5-time All-Star, and last year’s playoff MVP (led the team to their fourth Stanley Cup trophy) suffered a concussion and has not played yet this year.

Crosby took part in a full practice Monday, his first since the season began.

Pittsburgh is home after traveling to Nashville over the weekend, and following this game the Penguins host the Islanders before traveling to Philadelphia on Saturday.

Saturday’s win over the Avalanche was in large part due to the 27-year-old rookie Shane Harper’s first and second NHL goals.

Harper played in the minor leagues for the past seven years and scored 340 games in the AHL; his first NHL goal came in the first period and made the game 2-0.

Aaron Ekblad scored, as well as Vincent Trocheck and Jonathan Marchessault as Roberto Luongo notched 28 saves in the 5-2 victory.

"I think all of our group should be confident right now," – Marchessault.

Puck drop from the PPG Paints Arena is at 7 p.m.

Previous Golden State Reloads in Offseason, Ready for Title Run
Next NHL Preview: Lightning On The Road At Toronto