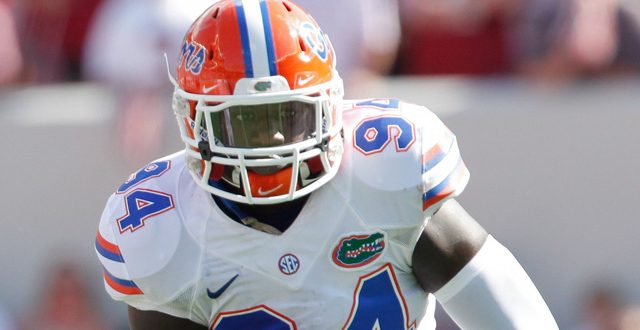 The Florida Gator defensive line has seen its fair share of injuries this season between Jordan Sherit, Joey Ivie, and Bryan Cox Jr. But heading into last week’s annual Florida-Georgia game, the entire defensive line was supposed to be healthy; that was until pre-game warm-ups. During warm-ups, redshirt senior Bryan Cox Jr. suffered what he can only call a freak accident.

The accident caused Cox to break his hand not only putting his ability to play against the Bulldogs, but his ability to suit up the rest of the season. He said the training staff came up with a plan to treat the hand allowing him to play. Cox played the entire game with a giant club wrap on his left hand that he called the biggest he’s seen.

Bryan Cox said he's got the biggest club he's seen: "Mine trumps them all."

With the club on his hand, Cox was able to record a QB hurry on Jacob Eason; the Gator defense had a season-high 16 QB hurries on the day. Cox did not record any other statistic on the day, but with the hurry it gave him five QB hurries on the season putting him second at the time in that statistic.

The injuries have slowed Cox’s season. The redshirt-senior has 14 total tackles on the season with two of them for a loss. But the 6-foot-3 defensive lineman hasn’t recorded a sack yet this season. Despite the lack of production, Cox knows playing through injury is important to this team. The bar has been raised high for Cox though as he’s coming off a 2015 season where he had 10.5 tackles for loss and 3.5 sacks.

Cox and the rest of the Gator D-line look to duplicate their success against Georgia this weekend when they head to Arkansas. This is the first time Florida is playing Fayetteville since a 38-7 win in 2008. Florida is in primetime for this match-up as kickoff is on CBS at 3:30 p.m.

Im a senior at the University of Florida currently pursuing a degree in Telecommunications. I work for ESPN Gainesville 95.3 and anchor the Monday sports broadcast for WUFT First At Five. Im from New York and an avid sports fan of all New York teams.
Previous Scott Stricklin Starting First Day as UF AD
Next Preview: Gators to Face Georgia and Mississippi State on the Road