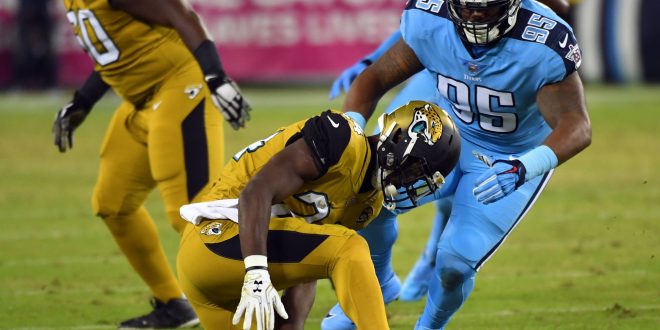 NFL Preview: Jaguars Travel for Match Up with Banged up Chiefs

After losing two games in a row, the Jacksonville Jaguars travel to Arrowhead to face a red hot Kansas City Chiefs team this Sunday afternoon. Jacksonville comes into the game with a shoddy 2 – 5 record, dropping their last two outings to the Titans and the Raiders. Meanwhile, Kansas City has won its last three and are still in the race for the top spot in the AFC West.

Earlier this week the Jags fired offensive coordinator Greg Olson after an embarrassing loss against Tennessee on Thursday Night Football. It seems like coach Gus Bradley and crew have hit the panic button and are trying to find a way to shake things up in the middle of the season.

Quarterbacks coach Nathaniel Hackett will take over on offense in the meantime. It’s clear that Jacksonville could use the help on this side of the ball. Blake Bortles, who was expected to have a breakout year, is struggling to make the most routine of throws. It seems every time the Jags take the field it’s three-and-out.  In an interview with ESPN Gainesville, former Jaguar offensive lineman and current radio analyst Tony Boselli says Bortles needs to be more consistent for his team.

The #Jaguars have promoted Quarterbacks Coach Nathaniel Hackett to Offensive Coordinator and relieved Greg Olson of his duties.

On the season, the Jaguars’ quarterback has thrown for a little under 2000 yards, 12 touchdowns and 9 interceptions. Additionally, the ground game for Jacksonville isn’t doing the team any favors. The team ranks 30th in the league in rushing yards with a measly 508 total. The Jaguars’ supposed featured back, T.J. Yeldon, has rushed for 220 yards this season, which is 40th among all running backs.

In Kansas City the team is on a roll. They knocked down the Raiders, Saints, and Colts in their past three. This part of the season is crucial, as the AFC West race is neck and neck. The Broncos and Raiders sit atop the division with a 6 – 2 record. If Kansas City wants a chance to make a playoffs, they need to take capitalize in every game possible.

Despite the team’s recent success, multiple injuries may impede the KC’s ability to convincingly defeat the Jaguars. In their last game against the Colts, quarterback Alex Smith was pulled out of the game twice for hits to the head. Head coach Andy Reid said the concussion test wasn’t an issue for Smith. However, the team is opting to play it safe and run Nick Foles out for his first start in a Kansas City uniform.

To say the Chiefs’ backfield is banged up, would be an understatement. Jamaal Charles was placed on IR this week and will undergo a second knee surgery. He could theoretically return for the last game of the season, but it doesn’t seem very beneficial as this is the same knee that Charles tore his ACL in last season. Also, backup tailback Spencer Ware is out with a concussion. So Charcandrick West will assume the lead running back duties.

On paper, Kansas City’s defense should have no problem handling Jacksonville’s up and down offense. The Chiefs D ranks in the top half of the league in passing yards allowed, rushing yards allowed and total points allowed. Although Kansas City’s team is ridden with injuries, the team will be favored to take care of business at home.

"Alex is going to be great. He has helped me ever since I got here."

Nick Foles talks about his relationship with Alex Smith. pic.twitter.com/b9MoU8iJb5