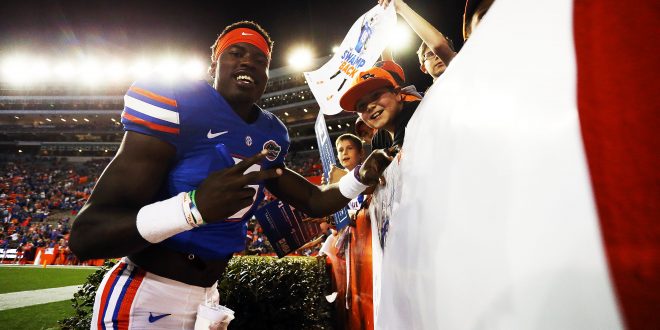 This upcoming Saturday against the South Carolina Gamecocks (5-4, 3-4 SEC), wide receiver Ahmad Fulwood will be one of 12 seniors playing their final game in The Swamp.

A Look Back at Fulwood’s Career

Seeing game action immediately as a true freshman, Fulwood has appeared in all 46 games of his collegiate career thus far. Here are his statistics from his four-year career for the Orange and Blue:

Fulwood has experienced some of the darker moments in Gator football history during his time in Gainesville. As a freshman, he was a member of the first sub-.500 Gator team since 1979.

His sophomore year he played in the 42-13 homecoming loss to Missouri . In his junior campaign he had to deal with a coaching transition in Jim McElwain’s first year.

Now in his senior year he has one final chance to avoid going winless against rivals Florida State or LSU. As a guy who does not usually get emotional before football games, Fulwood says that will not be the case against South Carolina.

With quarterback Luke Del Rio out for this game due to a shoulder injury, the starting job is

yet again up in the air. Unlike earlier in the season, there is no guarantee that backup Austin Appleby will be the undisputed starter.

According to Florida head coach Jim McElwain, freshmen Feleipe Franks and Kyle Trask will both have an opportunity to battle for the position. Appleby, however, will get first team reps.

When asked about the quarterback situation, Fulwood had much to say about each potential starter.

Fulwood said that the graduate transfer did a good job at communicating to everyone on the offense. Florida’s offense was arguably at their best when Appleby led them to 21 points in the first half against Tennessee.

However, the offense did regress the following week when the Gators only mustered 13 points and 236 total yards against Vanderbilt.

From what he has seen in practice, Fulwood likes Trask’s preplay recognition along with his timing and arm strength. A Texas product from the city of Manvel, Trask completed 118 of 161 career passes (73 completion percentage) for 1,820 yards, 17 touchdowns, and no interceptions in 30 high school games.

When discussing Franks, Fulwood said he was very similar to Trask. He did note that Franks put better touch on his passes, but overall lauded the skills of both freshmen equally.

Hailing from Crawfordville, Florida, the 6’6 Franks dominated in high school. Playing in 47 games, he completed 376 of 661 passes (57 completion percentage) for 7,380 yards, 87 touchdowns, and just 17 interceptions. He threw 35 touchdowns and only two picks his senior year.

For Fulwood, his Senior Day gets magnified due to the fact that Will Muschamp will be on the opposing sideline. Muschamp recruited Fulwood to Florida in 2012 and sold him on the program with his creation of a family environment.

Despite playing under Muschamp for just two years, Fulwood does admit that it will be different playing against his old coach. For the rest of Gator Nation, Muschamp’s return may not draw sympathetic responses as he went 28-21 as Florida’s head coach and lost a total of eight home games in four years.

Fulwood says that the offense is ready to rally around whoever wins the starting quarterback job. Who that is going to be is still to be determined. The Gators have scored just 63 offensive points in their last four games and are nationally ranked 76th in scoring offense, 91st in total offense, 95th in rushing offense, and 69th in passing offense.

Whether it’s Appleby, Trask, or Franks, the Florida Gators (6-2, 4-2 SEC) will take the field with a quarterback of some kind against South Carolina this Saturday. Kickoff is set for noon. The game can be seen on CBS and heard on the Gator IMG Sports Network.