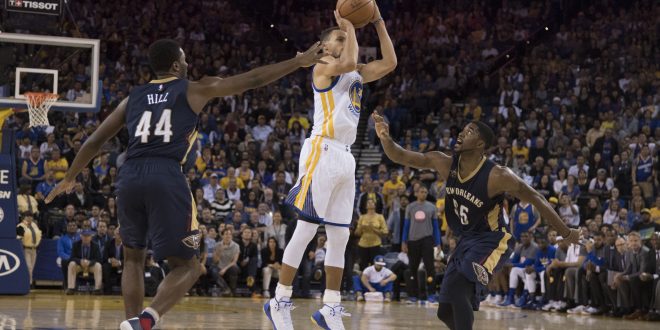 Saying that Steph Curry is a “video game” does not do the man justice. After blowing the single-season three-point record out of the water last season, Curry splashed into new heights Monday night. He nailed 13 three pointers in a winning effort against New Orleans, setting the record for most in a single game. Warriors head coach Steve Kerr isn’t surprised in the slightest at Curry’s performance.

.@StephenCurry30 for the record! #SPLASH pic.twitter.com/kZkbKlI7sx

Kobe Bryant and Donyell Marshall held the previous record of 12 threes in a game before Curry just edged the two on Monday. On top of Steph Curry’s three-point record, he put up 46 points and five assists in a big 116-106 win over the Pelicans. Kevin Durant and Klay Thompson both combined for 46 points as well.

Golden State is now 5-2 with losses coming to just the Spurs and the Lakers. Curry will look to hit from outside again tomorrow when they host the Mavericks.