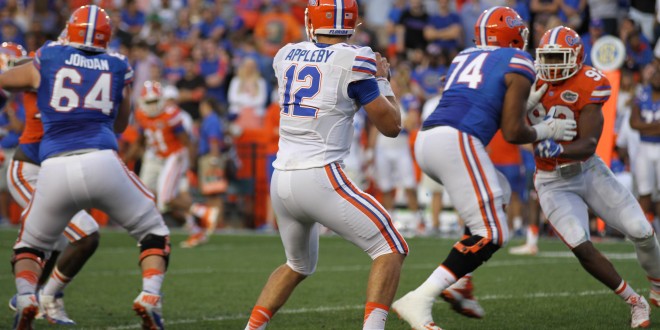 Austin Appleby will start at quarterback for the Florida Gators this week against South Carolina.

The grad transfer from Purdue will be replacing Luke Del Rio who is out with a shoulder injury, head coach Jim McElwain announced Wednesday during the SEC teleconference.

Appleby started two games earlier this season-a loss to Tennessee and win at Vanderbilt-when Del Rio was out with a  left sprained knee. He was 42-of-67 passing for 440 yards and threw three touchdowns. Appleby also threw an interception during those two games.

Coach McElwain hasn’t ruled out burning true freshman Feleipe Franks’ redshirt. McElwain said Franks has been getting reps in at practice, and will be the backup on Saturday.

Appleby will take the first snaps but McElwain said he is not afraid to play Franks if they need a change of pace in the game.

That leaves Kyle Trask, who McElwain said will be “kind of in the bullpen” as the third QB for the Gators against South Carolina.