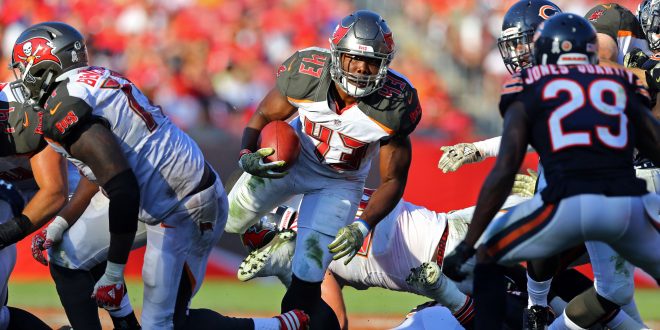 The Tampa Bay Buccaneers earned their first win at home this season after defeating the Chicago Bears 36-10 Sunday. Strong game play by the Bucs was just too much for the Bears to handle adding a loss to their already unimpressive 2-7 record. Quarterback Jameis Winston led the way for the Bucs throwing for 312 yards and two touchdowns. Bucs Head Coach Dirk Koetter says Winston works well when he improvises and the team can always count on him to make plays. Winston is now the youngest QB in NFL history to throw 40 touchdowns.

The game didn’t look too promising for the Chicago Bears from the get-go, after the first touch down of the game was a 20-yard interception return by Chris Conte. Early mistakes by the Bears put the Bucs in the lead and Chicago quickly fell in an unescapable downward spiral. A 54-yard field goal by Connor Barth put points on the board for Chicago leaving the score at the end of the first quarter 7-3.

The beginning of the second quarter was quiet for both teams. The Bucs didn’t pick the pace back up again until 3:33 was left in the quarter. A 10-yard pass from Jameis Winston to Cameron Brate put another touchdown on the board for Tampa Bay. The points kept coming for the Bucs after Roberto Aguayo scored a 30-yard field goal. The first half of the game concluded with a Bears touchdown.

The rest of the game belonged to Tampa Bay. Early in the third, a 43-yard pass from Winston to Freddie Martino landed Winston’s 40th touchdown, setting the new record for youngest QB in the NFL with 40 touchdowns at just 22-years old. The momentum for Tampa Bay continued with Roberto Aguayo kicking a 27-yard field goal and Robert Ayers with a safety. The strong third quarter play by the Bucs put the score at the end of the third, 29-10.

The fourth quarter consisted of an additional touchdown by the Bucs. A one-yard run by Doug Martin added points to Tampa Bay’s already hefty lead. The last touchdown made the final score of the game 36-10 Bucs. Chicago once again left it’s fans disappointed after many were hopeful for a two-game winning streak.

Next up, the Bucs will continue a stretch of four consecutive games outside the NFC South, traveling to Kansas City November 20.