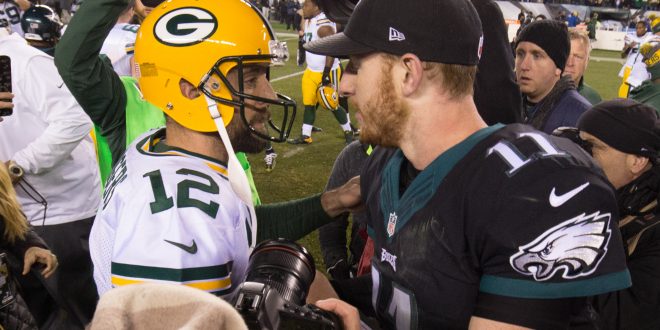 Monday Night Football featured a battle of one of the youngest quarterbacks in the leagues versus one of the most experienced. Aaron Rodgers and the Green Bay Packers headed east to take on Carson Wentz and the Philadelphia Eagles. Early on, Wentz used his legs from one yard out to tie the game at seven a piece.

Rodgers connected with Davante Adams twice in the first two quarters to give his team the lead. After the first half, Rodgers and the Pack lead Philly 14-10

Third down conversions proved to be difference in this game. The Packers converted 10 first downs compared to just five for the Eagles. After the game, Rodgers pointed that out as a key to getting things back on track this season. The Packers’ defense limited the Eagles in the second half to just three points. Wentz finished with 254 yards, one interception, and just the one rushing touchdown.

Green Bay improves to 5-6 on the year, still two games back of Detroit in the division. Green Bay will get a crack at the Lions in the final regular season matchup of the year. As for the rookie QB and Philadelphia, they are also 5-6 on the season and are last in the NFC East.