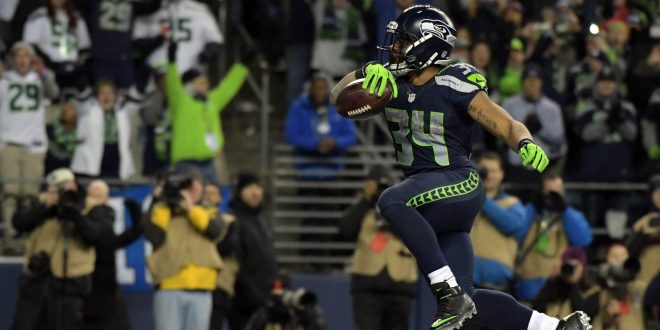 The NFL playoffs are underway and featured two NFC wildcard games over the weekend.

On Sunday, the Green Bay Packers (10-6), led by star quarterback Aaron Rodgers, also came out victorious with a 38-13 win over the New York Giants (11-5).  The Packers will meet the Dallas Cowboys, who enjoyed a BYE this weekend, on January 15.

Two words: Thomas Rawls.  The Seattle running back led his team to a comfortable victory over Detroit, running for a season-high 161 yards.  His first half of 100 yards rushing set the stage for a strong second half for his team. He also managed a four-yard touchdown in the first half.  Quarterback Russell Wilson also showed up for his team, completing 23-for-30 passes, and two touchdowns.

Detroit never managed to break down the Seattle’s defensive wall.  Quarterback Matthew Stafford and his team struggled to find the end zone, thus ending their season with a loss.

The Packers entered the game on a six-game win streak and an unstoppable Aaron Rodgers.  Early in the game, Rodgers and his team struggled, but not for long.   The veteran quarterback was unstoppable in the second half, and by the end of the game, he threw for 362 yards, four touchdowns, and no interceptions.  He was able to scramble to keep possession of the ball in high-pressure situations.  And you can’t forget about Rodgers’ Hail Mary pass:

Rodgers talked about how he was able to turn it around after his early struggles.

The game was highly anticipated but ended in a blowout for the Giants. The young team had a solid run in the regular season, but couldn’t topple the Packers over the weekend.  Giants quarterback Eli Manning discussed what went wrong during the game.

With the win, the Seahawks will head east to play the Atlanta Falcons.  The Falcons enjoyed a BYE week over the weekend while the Seahawks battled it out against the Lions.  This game will be a rematch of the October game when Seattle narrowly beat the Falcons and Richard Sherman had a blowup on the sidelines.  Tensions and excitement will be high for the game.  The two teams will face off on Saturday.

Dak Prescott is arguably one of the best quarterbacks in the league—and he’s only a rookie.  Prescott will play his first NFL playoff game when the Packers head

to the Lone Star State.  The Cowboys’ defense will have to work to stop Aaron Rodgers and the Green Bay offense at all costs.  Rodgers is hot right now and his team is on a seven-game win streak going into this week.  The Cowboys aren’t able to say the same after their New Year’s Day loss to Philadelphia.  The Cowboys will need to regroup and take advantage of their BYE if they want to beat the Packers on Sunday.

You can find coverage of the Seahawks vs. Falcons game on Saturday, January 14 beginning at 4:35 p.m. on FOX.  The Packers vs. Cowboys game will take place the next day at 4:40 p.m. on FOX.

This Sunday, the San Francisco 49ers travel to familiar territory when they face their NFC …