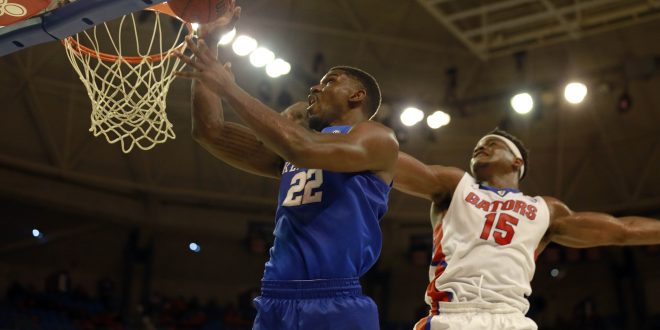 After a several big wins, including a 93-54 victory over the Missouri Tigers at home Thursday night, the No.24 Florida Gators have to quickly turn around and face the best team in the SEC right now, the No. 8 Kentucky Wildcats.

Kentucky is coming off of a home win over the Georgia Bulldogs in overtime 90-81 at home.

Kentucky has given Florida trouble the past few seasons. The Gators haven’t defeated the Wildcats since 2014, which was the year Florida won the SEC Championship and made their Final Four appearance. However, in Gainesville, Kentucky has lost three of its past six games which were in 2011, 2013, and 2014.

The last time the Gators faced Kentucky was on March 1st of last year. Kentucky defeated the Gators in Gainesville with a final score of 88-79 on Florida’s senior night. On that night John Egbunu had a career-high 27 points and Dorian Finney-Smith had 15 points and five rebounds. However, it was not enough to get over Kentucky’s Jamal Murray who had 21 points, and Alex Poythress’s 12 points and 10 rebounds.

“I think we’re a more confident team than a year ago. I think our guys know that we have to play really well to beat them.” Florida basketball coach Mike White says.

However, it’s no question that the Kentucky Wildcats (18-4) are a young team, they always are, with some “one-and-done” players that will be NBA-bound after this season. Kentucky is led by freshman Malik Monk who averages 22.4 points per game. Monk even dropped 37 points in their most recent game. If that’s not enough for you, back in December he scored a whooping 47 points against North Carolina, which was a UK freshman record.

Monk who is an Arkansas Native also has some history with KeVaughn Allen. They both played against each other in the Arkansas Class 7A state championship game in high school. Allen scored 28 points and led North Little Rock High to a 66-59 victory.

De’Aaron Fox is another one who the Wildcats depend on. Fox, who is also a freshman, averages 15.9 ppg and 5.7 assists per game. Fox didn’t play in the Georgia game and has been sick. University of Kentucky head basketball coach John Calipari says it will be a game-time decision if Fox will play.

The Florida Gators have been on the road a lot these past few games but it was definitely a time to prove that they are a very unselfish team. At each of their past few games, different players had their shining moments. Whether if it was Devin Robinson’s career-high 24 points at LSU, Kevarrius Hayes’s 20 point career high, or Chris Chiozza’s triple-double of 12 points, 12 rebounds, and 10 assists, these guys know how to feed off of each others energy.

The Gators lead the SEC in forced turnovers at 11.5 per game. The Gators will need to use that to their advantage with a fast paced team like Kentucky. Another thing the Gators need to do to stop this fast paced team is “transition defense” head White says.

This is an important game for Florida because if they win, they will take the lead in the SEC. It also proves that the Gators can beat a ranked team, which they haven’t done yet this season.

Florida and Kentucky will face off in the Stephen C. O’Connell center at the Exactech Arena on Saturday night at 8:15 p.m. The game will be televised on ESPN and live radio coverage will be on ESPN 98.1, 850 AM WRUF.