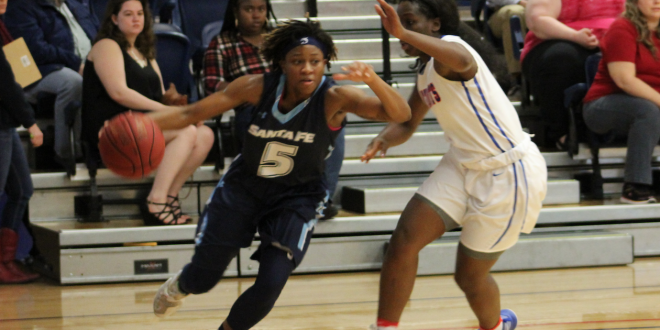 The Santa Fe Saints women’s basketball team keeps its win streak alive with an 85-70 win over the College of Central Florida Patriots on Saturday night. The Saints have now won 12 straight games, nine of those being conference games. However, the win was not by any means a walk in the park. 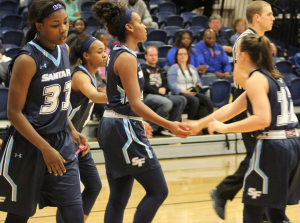 This far into conference play, what’s a game without a few bumps in the road? In tonight’s case, the Saints had more than a few.

Jumping out early in the first quarter to a 27-14 lead, the thought of the Saints’ Wednesday night 100-point total win quickly surfaced. But in a competitive Mid-Florida Conference, the Patriots were not going down without a fight.

The Patriots came out strong on both ends, holding the Saints to just eight points. The Saints’ offense is very dependent upon guard Ari Emanuel-Wright and Corey Staples to contribute a large majority of their points. 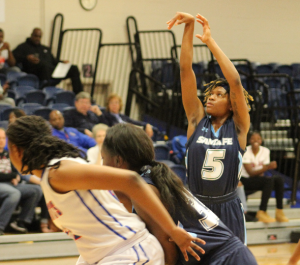 For the Saints a strong second half was pivotal for a win, and they were able to channel their inner competitiveness and get things going on the offensive end. Emanuel-Wright said she was well aware of her scoring troubles in the first half but she chose not to focus on that.

Instead, she said she just tried to motivate her teammates to keep their heads up and keep playing hard. And in the third quarter she and her teammates showed their mental toughness and their ability to have a short term memory.

Coming out confident that Saints were able to lift past the Patriots and outscore them 29-12 in the quarter. Emanuel-Wright finished the game with 21 points and six rebounds. In addition, Tatiyana Rock and Tabitha Odabe each added 16 points.

Next up, Santa Fe will play St. Petersburg College at home on Wednesday. This will be the Saints’ last game in the second round of conference play.