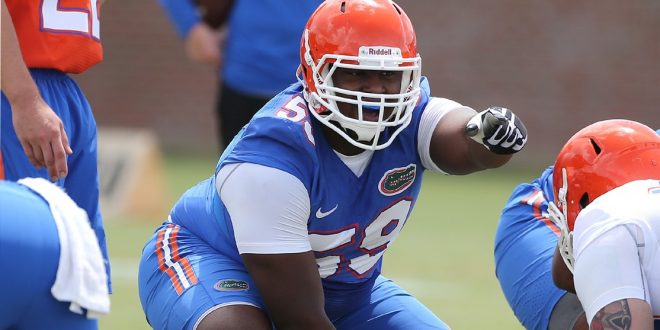 Spring Ball Back in Action-So Is TJ McCoy

After transferring from NC State, O-lineman TJ McCoy followed in his father’s footsteps and officially became a Gator. His father, Tony McCoy, played defensive tackle for the Gators from 1988-91 and continued his professional career playing for the Indianapolis Colts and Arizona Cardinals. After biding his time during a redshirt 2015 season, TJ McCoy finally showcased his skills last season.

McCoy made his debut in the 2016 season when Florida took on Kentucky. In just the second week of the season, McCoy’s initial performance led to his continued appearances on the field. McCoy played in seven games throughout the season and started in four of them. He was fortunate to have the opportunity to play in his first SEC Championship game, which was a great first moment for him. Despite this, McCoy is hungry to get back to a championship game and have the chance to come out on top.

Another opportunity to get better. #GoGators #Swamp17 pic.twitter.com/uBIQkCe3Y1

Excited to be back in preparation for the 2017 season, McCoy is in high spirits. The energy that he and his teammates have brought to spring practice thus far has left Head Coach Jim McElwain pleased. McCoy attributes this liveliness to the encouragement of offensive line coach Brad Davis. Davis continuously tells his players that they are all in competition with each other, contributing to their drive to be the best each and everyday. As an extremely intense guy with high expectations of his players, Davis’ presence on the sideline further increases McCoy’s dedication to the game.

"They are playing with a renewed sense of how they go about it. He demands it from them." — McElwain on O-Line, new OL coach Brad Davis

McCoy has taken advantage of his experience playing against guys that are all around great caliber football players. His motivation is emphasized when going up against guys that will be first-round picks in the NFL. After facing the defensive fronts of teams like Alabama, FSU and LSU, he has seen room for personal improvement. McCoy is a mindful offensive lineman who seeks to enhance his conditioning level, technique, and overall knowledge of the game.

Previous Spring Ball has Sprung, so has Lamical Perine
Next Gator Baseball Survives Stetson In Extras