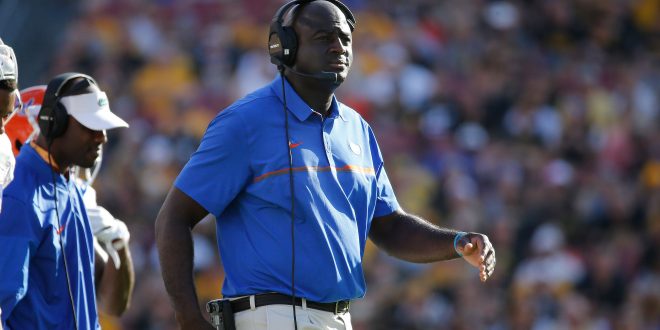 Florida Gators defensive line coach Chris Rumph is still searching for a dominant pass rusher on the defensive line this spring. Rumph said following Friday’s practice they want to find “a consistent pass rusher.” The hope is that this would allow the team not to blitz as much as in years past.

Two players that could fill this role for the Gators are Jabari Zuniga and Tavon Bryan. Coach Rumph had high praise for both Zuniga and Bryan on their play this spring. Rumph spoke particularly highly of Tavon Bryan. Rumph says that Bryan’s play this spring has been, “dominant.” Rumph praised Bryan’s consistency in every situation. He also stated that if Bryan continues his strong performance, “offenses will have to game plan for him.”

Jefferson On the Edge

Coach Rumph also addressed the recent move of CeCe Jefferson on the defensive line. Jefferson has taken most of his reps this spring on the edge rather than the interior. Rumph said the plan right now is for Jefferson to be on the edge. Rumph hopes once the freshmen come in during the fall that Jefferson could work both inside and outside.

After losing several players on the defensive line, Khari Clark is expected to have a larger role this season. Coach Rumph says that Clark has slim down and improve his cardio, which will allow him to “sustain more” this fall. This has been what Rumph has been “harping on” throughout the off-season with Clark. Rumph said he wanted to “push” Clark so he kept him out on the field more than usual.

Another defensive lineman who has caught the attention of Rumph has been Jachai Polite. When asked what he liked about Polite as a player, Rumph he’s really smart for a young guy and added he is a versatile player who can work inside or outside on the defensive line. The factor for where Polite’s role will be on the defensive line will be his weight. Rumph hopes his weight can go up so the coaches can game plan him both on the interior as well as the exterior.