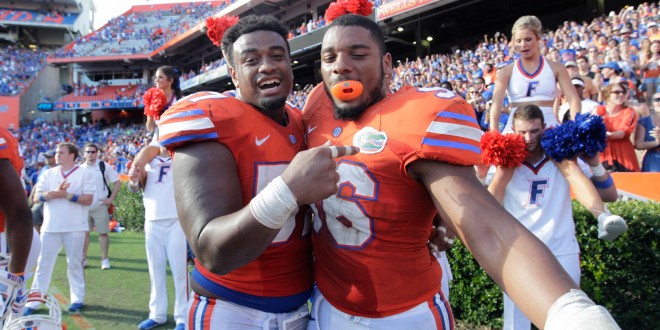 The hours are counting down until the Orange and Blue Debut kicks off this Friday night. A lot of eyes will be on the Florida Gators, particularly looking at the quarterback position. Yet, that position is not the only one that carries some sort of question mark.

The Gator defensive line is looking to solidify themselves at the end of spring ball on Friday and become a team strength heading into the fall.

The defense as a whole is losing a lot of talent. In the defensive backfield Teez Tabor, Quincy Wilson, and Marcus Maye are all gone. At linebacker, Alex Anzalone and Jarrad Davis are gone as well.

As for the defensive line, Bryan Cox, Joey Ivie, and Caleb Brantley are all heading to a pro career. That’s EIGHT starters no longer on the defensive side of the ball.

The line is going to be much younger with unproven abilities. The leader of the line, CeCe Jefferson, is not too concerned about losing all of those guys.

Jefferson is entering his third year at UF. Jordan Sherit and Khairi Clark are other experienced players that will look to fill the void of players that have left. Jefferson says he is going to continue to lead the way.

Defensive coordinator Randy Shannon recently said he wants the defense to cause more pressure with just four pass rushers. Jefferson is excited for the challenge of opposing teams planning to contain him.

Defensive line coach Chris Rumph is also entering his third year on the Gator coaching staff. Several weeks ago, he alluded to how young and inexperienced this line is. However, he has been impressed with Taven Bryan.

Rumph also expressed the need for someone to emerge as a premiere pass rusher.

2017 marks the first year that Rumph is the co-defensive coordinator. He also wants to apply more pressure on the quarterback without blitzing, just like Shannon does.

The Orange and Blue Debut kicks off on Friday at 7:30 p.m. The game can be seen on the SEC Network.