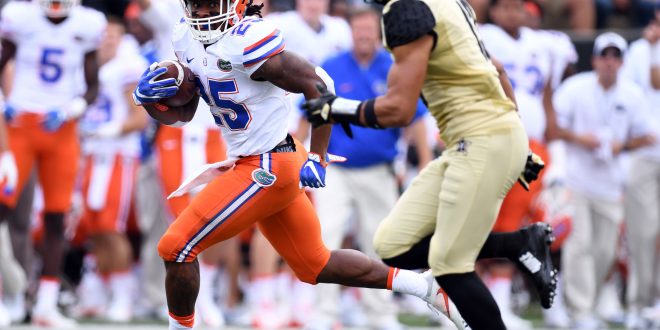 The Gators in 2016 did not have a clear starter at running back. Instead, the team opted for a “running back by committee,” with four running backs on the roster receiving a significant amount of carries.

Here are their stats:

Coach Seider has mentioned that things might look different next season. Jordan Scarlett looks to get the most carries from the bunch, but Seider says he wants to play whoever is hot at the moment. One thing Coach Seider mentioned was important was not running a back too hard.

Seider likes the way Scarlett runs and has done everything the coaches have asked of him. He says that Scarlett won’t try to juke you out, but will run through you.

On how many carries Scarlett can handle, Seider said he didn’t know the answer to that question. The coaches have been pushing their players to the limit in the Florida heat, and the players have responded.

The annual Orange and Blue spring game kicks off this Friday at 7:30 p.m. from Ben Hill Griffin Stadium. This is where fans can get their first look at the Gator offense and defense, giving a sneak peek into what they can expect going into the season. The game will also be broadcasted on SEC Network.

Shows pride for his local Florida teams! Repping orange and blue at the Swamp for the Gators, or orange and teal for the Dolphins. Football enthusiast and two-time fantasy football champion.
@BrandonRossman
Previous Spring Preview: Defensive Line Ready to Step Up
Next Spring Preview: Florida Wide Receivers