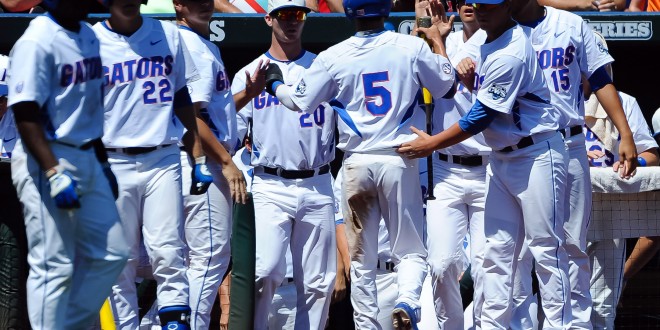 The 10th ranked Florida baseball team brought out its hitting sticks against the Vanderbilt Commodores on Saturday, clinching the series with a 20-8 win over Vanderbilt in Nashville.  Both Vanderbilt and Florida went into the game 7-7 in conference play and the Gators would improve to 24-12 overall record after their win as the Commodores would fall 22-15.

After one out in the top of the first, Dalton Guthrie gave the Gators momentum after their 2-0 loss the night before, smacking a solo home run over the left-center field wall for his second home run of the season. Nelson Maldonado would continue the home run derby for the Gators by hitting a three-run homer after Austin Langworthy and Ryan Larson reached by an error and a hit-by-pitch respectively to complete a four run first inning.

The Gators put up an eight spot in the third inning.  scoring continued in the third inning for Florida. After loading the bases, JJ Schwarz drove in two runs with a single that would break his aluminum bat.  Designated hitter Keenan Bell drove home a run with a hit and catcher Mark Kolozsvary drove in two more with a double to highlight the inning.

Vanderbilt tries to create a comeback

The scoring seemed to come in waves throughout the game as Vanderbilt responded with a five run fourth inning off of Gator starter and winner Jackson Kowar.  Will Toffey drove home Vandy’s first run with a single and Julian Infante followed with a single to plate a run.  Jason Delay would follow with a two-run double and designated hitter JJ Bleday drove in another run with an RBI double. The next run for Vanderbilt would come in the fifth inning as second baseman Ethan Paul would lead off the frame with a single and would score the only run of the inning when Jason Delay singled to center field.

Jackson Kowar would get the win for the Gators to move to 6-0 on the year even though he allowed six runs on 10 hits.  Vanderbilt finished the game with a total of eight pitching changes as the Florida bats lit up Hawkins Field. Gator coach Kevin O’Sullivan says that he hopes this impressive offensive performance by his team will continue moving forward.

Florida will return home to face North Florida on Tuesday and have another weekend series at McKethan Stadium against South Carolina beginning on Thursday.