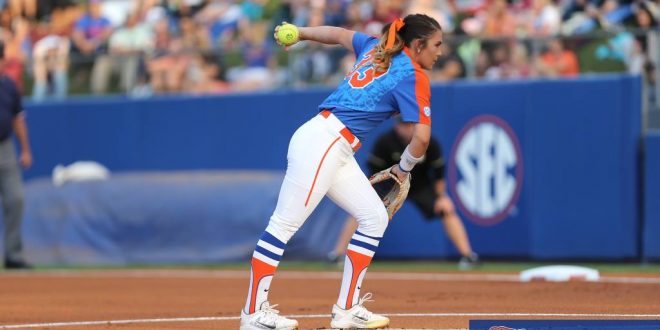 No. 3 Gator Softball Falls Short To No. 21 Kentucky

The third ranked Florida softball team loses just its second SEC game of the year after falling to 21st ranked Kentucky on the road on Saturday by a score of 5-1, the first defeat to Kentucky in four years.

FINAL | No. 3 Gators drop decision to No. 21 Kentucky. The final game of the series is set for tomorrow at 1 PM on the SEC Network +

Delanie Gourley started in the circle for Florida and took the loss, tossing a complete game while striking out seven; she is now 13-3 on the season.

The Wildcats took the lead, 1-0, in the first inning on a throwing error from Sophia Reynoso at her shortstop position. The Gators responded with a single up the middle from Aleshia Ocasio she scored on an RBI double by Justine McLean to tie the game at 1-1.

T2 | McLean with the RBI single to center field scores Ocasio from 2B and we are tied 1-1!! #GoGators

Kentucky was able to break the tie in the bottom of the fifth inning.  Two singles put runners on the corners and a run scored on a wild pitch from Gourley. Two more runs scored on a Kentucky single to make the score 3-1.  In the sixth inning, Katie Reed singled in two runs to ice the game for the Wildcats.  With the win, the Wildcats improve to 26-12 overall land to 6-8 in SEC play while Florida falls to 39-3 overall and to 14-2 in SEC play.

The Gators will look to win the series on Sunday, first pitch is at 1 p.m. The game will air on SEC Network Plus.