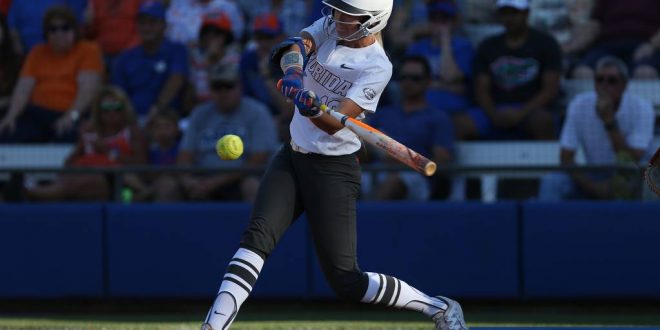 The top ranked Gator softball team takes the first game of a three game series at home with the Ole Miss Rebels on Friday with a 2-0 win to move them to 16-2 in SEC play.   As it has been many times this season, one of the big story lines for the game was the pitching of Florida’s Kelly Barnhill who pitched shutout ball while tying her season-high with 16 strikeouts.

Florida scored first for the 37th time this season. The Gators banged out two runs in the first inning, and seemed to have the momentum going. But that was short lived, as those were the only runs scored for the entire contest. A hit from Kayli Kvistad sent Amanda Lorenz home with the first run and Aleshia Ocasio helped Florida reach a 2-0 lead by hitting an RBI single to right field. That scored Janell Wheaton, and it could have been more, but Jaimie Hoover was called out at home trying to score on the hit as well.

Ole Miss hung tough, not allowing any more runs after the first inning but Barnhill was too much to overcome.  Florida’s defense was good as well but Barnhill was the story, who did not walk a batter while throwing a fourth straight game with 15 or more strikeouts.

The Gators will face Ole Miss again Saturday at 4 pm in the annual Yellow Game, a game that brings awareness for pediatric cancer and will honor and remember Heather Braswell. The Gators will have yellow in their uniforms to help remember her on this special day.