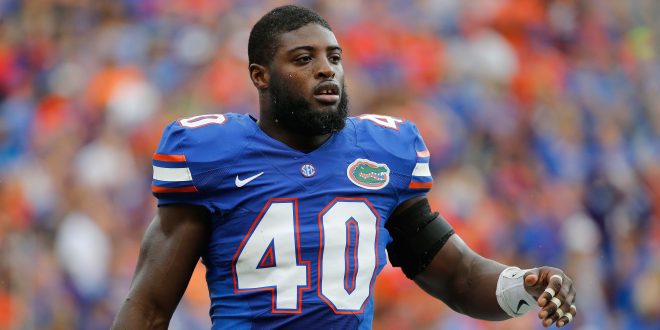 With the 21st overall pick, the Detroit Lions selected Jarrad Davis, the first Gator off the board in the 2017 draft. Davis was the second linebacker taken, being drafted before other notable prospects like Rueben Foster and Raekwon McMillan.

Davis figures to get a good amount of playing time early on, as there was talk of the Lions loving Davis coming in and he fills a position of need. Deandre Levy was released in March by the team, and they had a hole in the middle of the defense. He slots in to a defense where he figures to be a three-down linebacker who is a high character guy and has a big motor.

The streak lives. @GatorsFB has had a player selected in every #NFLDraft since 1952.

Strengths: “Effective in spy role with athleticism to mirror mobile quarterbacks. Has closing burst that could become a weapon as a blitzer. Wrap-up tackler with strong finishing rate. Improved his discipline pursuing to the sideline.”

Weaknesses: “Downhill routes to the ball can be problematic. Will step too far downhill and get trapped in traffic on counters or bounces to the perimeter. Needs to play with more consistent technique and positioning to properly leverage his gaps against gap plays.”

OFFICIAL: Jarrad Davis is going to be a Lion. Detroit just got a relentless player. #Gators #NFLDraft pic.twitter.com/ftJlxJsjTl

Davis boosted his draft stock in the months leading up to the draft.  He missed the combine due to injury, but impressed at his pro day.

He ran his 40-yard dash in 4.56 seconds and had an outstanding 38.5 inch vertical jump. Both results would’ve been first among true linebackers at the combine.

Davis enters the NFL after having been a key cog in defenses that led the Gators to back-to-back SEC Championship. His junior year, alongside Antonio Morrison, he started 12 games and finished the season with the second most tackles on the team (98). He also had 11.5 tackles and 3.5 sacks, and entered his senior year as one of the leaders of a veteran defense. While he missed a few weeks because of injury, he made 60 tackles and was named a Second Team All-American and Second Team All-SEC.