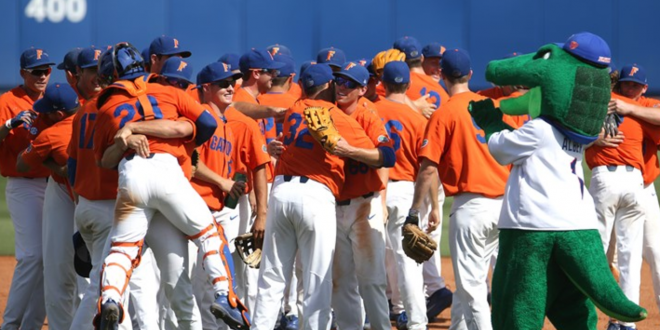 SEC Baseball Tournament: Florida And Auburn Square Off In Hoover

The Florida Gator baseball team will begin their SEC Tournament run against the Auburn Tigers tonight around 9 p.m. Originally, the game was slated for 5:30 but all the tournament games were pushed back due to weather.

Ripple effect in tomorrow's games means that the #Gators will be the last game of the day on Wednesday. https://t.co/i3mfFPZccK

The Gators have come a long way since starting SEC play 6-6. They got swept in the opening series of conference play against Auburn. Now, Florida is the top seed in the tournament as SEC champions taking on the eighth seeded Tigers.

That series back in mid-March was uncharacteristic of the Gators. Auburn outscored them 22-9, in large part because of 14 runs in the first game. The second and third game were one-run ball games, both with costly mistakes from the orange and blue.

In the second game, Brady Singer threw lights out only allowing two runs and five hits; his solid start was spoiled by an awful night offensively with only three Gators getting hits. From the lead off batter to clean up, Florida was 0 for 15 with eight strikeouts.

In the third game, Jackson Kowar also has a solid outing only allowing two earned runs but miscues in the field allowed unearned runs to score. An error by Christian Hicks allowed two runs to came across on the same play and a throwing error by Frank Rubio at the end of the game gave Auburn the win.

Rivera In, Guthrie Out

Junior catcher Mike Rivera is expected to return to the lineup in some capacity, whether that be behind the plate or as designated hitter. He is recovering from a hamate (hand) injury and getting his bat going before the NCAA Tournament is something the Gators hope to do in Hoover.

One player they will definitely be without during the SEC Tournament is Dalton Guthrie. During Saturday’s game against Kentucky, the junior shortstop sprained his ankle while lunging at first base running out a ground ball. Defensively, he’ll be missed especially as he was selected to the SEC All-Defensive team.

Florida and Auburn will have to wait for the conclusion of the Missouri-LSU game. Once that game is over, first pitch will be about 30 minutes after.

Gator coach Kevin O’Sullivan is looking for his third SEC Tournament title but most importantly, his eighth national seed in 10 years so the Gators can host a Regional and Super Regional.

You can listen to the game on ESPN 98.1 FM 850 WRUF while watching on the SEC Network.