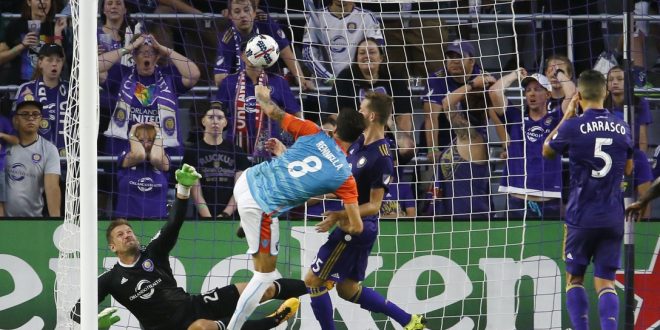 Orlando City Knocked Out of US Open Cup

Orlando City hosted NASL’s Miami FC in the 4th Round of the US Open Cup only to be embarrassed by the visitors.

Head Coach, Jason Kreis, switched around the starting line-up for this game adding some new faces into the mix. University of Central Florida graduate, Hadji Barry, started as a striker for the Lions. While 18-year old Pierre da Silva started on the wing. The starting back line for Orlando have never played a full game together. Rafael Ramos played right back, with Jonathan Spector and Leonardo Pereira as center backs, and Victor “PC” Giro as left back.

As a result of the changes to the squad, Miami FC was able to generate plenty of opportunities to score. Miami FC jumped out in front by using the widest parts of the pitch as their avenue of attack. A low cross right in front of Josh Saunders’ goal found the foot of Stefano Pinho in the 30th minute. Miami FC would add on a second goal before half as Pinho pealed off Spector’s marking in the box to head home a difficult ball.

Jason Kreis saw enough from center back Leonardo Periera on the night. Tommy Reading came on at halftime as a substitute to help sure up the back line and add some familiarity. Orlando City tried to press a little higher in the second half but the third goal of the game broke their spirits. Poor marking from the defense allowed a free cross to enter the 6-yard box. Pinho tapped it in to complete his hat-trick.

Too Little Too Late

The third goal sprung two more substitutes to enter the fray. Ricardo Kaka and Carlos Rivas came on to create offensive opportunities. Orlando City played with more bite and were rewarded in the 79th minute with Giles Barnes heading home a goal off a corner kick by Rivas. However, that was the only offensive display that paid off for the Lions. Final: 3-1 Miami FC

Orlando City returns to MLS action against Eastern Conference rival Montreal Impact on Saturday. This is a big match for Orlando in the East as they’re about to play four matches in ten days.

Originally from Ocala, Florida. University of Florida Class of 2017. Avid FIFA player willing to beat anybody. Follow me on Twitter for everything you need to know!
@JoshLaSelva
Previous U.S. Open Cup Preview: Orlando City SC host Miami FC
Next The U.S. Open Is Underway