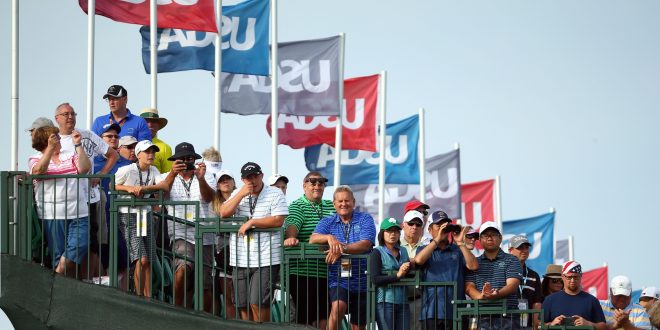 The U.S. Open Is Underway

The second golf major of 2017 is officially underway. Some of the top stars in the sport take on Erin Hills at the start of the 117th U.S. Open.

Phil Mickelson has officially withdrawn from the event at Erin Hills. making it the first time since 1993 he will miss the tournament. Mickelson will be attending his daughters graduation in California. This makes the 2017 U.S. Open the first major since 1994 that will not feature either Mickelson or Tiger Woods

Roberto Diaz will take Mickelson’s spot Thursday and Friday as the first alternate.

Erin Hill is just the 51st course to host the major in U.S. Open history. It is just the sixth public access course to receive the honor of hosting the U.S. Open. More than 140,000 patrons expected to be in attendance this weekend.

This is the longest course to host the tournament. With rain and wind expected during the tournament golfers will also be battling poor conditions throughout the weekend.

#USOpen Round 1 notes: Erin Hills will be played at 7,845 yards, with green speeds averaging 12'5". pic.twitter.com/ttztyFLpds

Rory McIlroy had some words to say on the conditions of the field.

Former Florida Gators Billy Horschel and Tyson Alexander will be competing in the event.

Horschel has won the individual medalist honors at the 2006 U.S. Amateur. While at Florida, he was a four-time all-american and was named SEC Player of the Year in 2007 and 2009. As a professional, he has won The Tour Championship at East Lake Golf Club and with it the FedEx Cup. This year marks his sixth U.S. Open.

Alexander, a Gainesville native, is looking for his first professional victory this weekend at the U.S. Open. He is the son of former Gators Golf head coach Buddy Alexander and is competing in the U.S. Open for the first time since 2009, when he competed as an amateur.

Live coverage of the game can be found on the U.S. Open website.

Welcome to Round 1 of the 117th #USOpen. We're live from the first tee at Erin Hills. https://t.co/cu6VZxhBVg