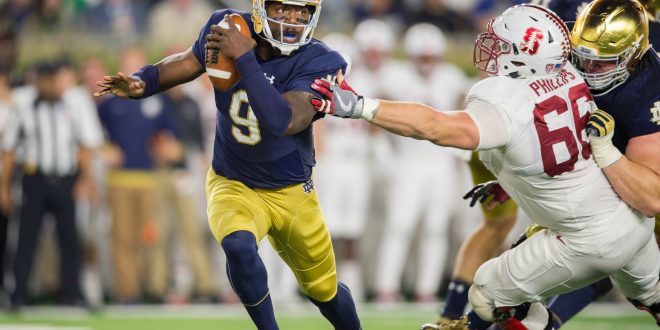 After rumors and much anticipation, two new Gators officially enrolled at the University of Florida, the football team announced. QB Malik Zaire and OL Jake Fruhmorgen are now students on campus.

Of the two Malik Zaire is the most well-known of the two. He transferred from Notre Dame and is a graduate student. The signal caller is seen as legitimate competition for the QB job this fall, and will duke it out with freshmen Feleipe Franks and Kyle Trasks. Given that Zaire is spending only one season with the Gators, there’s a high likelihood that he’ll see a lion’s share of a position that Florida’s struggled with in recent years.

That said, Zaire isn’t a panacea for the Orange and Blue, either. Here are his numbers from the last three seasons, all admittedly lackluster.

He was surpassed by DeShone Kizer, which is no slight on Zaire, but it shows that he never really established himself on the Fighting Irish. What Zaire does bring to the table is being a dual threat QB. While his numbers don’t reflect it (under 250 rushing yards in 16 career games), Zaire represents a departure from Luke Del Rio last season, who preferred playing out of the pocket.

Speaking of, it’s unclear what head coach Jim McElwain has in store for Luke Del Rio. The sophomore had an injury-shortened season, playing in six games with 8 TDs and 8 picks to go with 1,358 yards and a 56 percent completion rate. His QB rating of 118.6 ranked 105 of 120 qualified players. While he can’t be ruled out completely, Del Rio was already falling behind Feleipe Franks in spring. Barring catastrophic injury, there’s a fair chance Del Rio doesn’t take another snap for the Gators again.

Gator fans will have to wait a little longer to have a more solidified line. Fruhmorgen will sit out the 2017 season due to NCAA transfer rules. The Tampa native comes from Clemson where he spent two seasons playing and starting eight times.

Last season, he accumulated 13 knockdown blocks in 523 snaps. In 2015, he had seven knockdowns over 11 games and 245 snaps. For now, the Gators are expected to roll with LT Martez Ivey, LF Tyler Jordan, OC TJ McCoy, RG Fredrick Johnson and RT Jawaan Taylor.