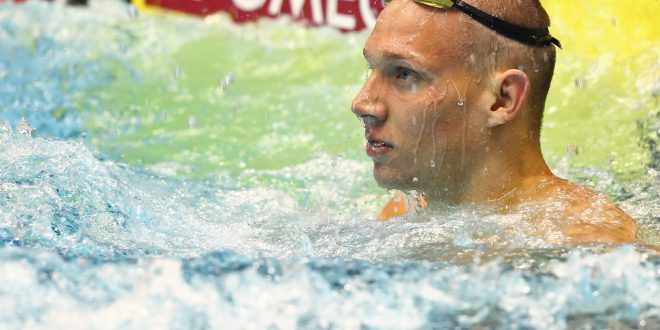 On the fifth day of the 2017 FINA World Championships in Budapest, Hungary, rising Gator senior Caeleb Dressel earned his third gold medal by winning the men’s 100 meter freestyle event.  In all, five Gator swimmers participated in events on Thursday, with Dressel and Liliana Szilagyi swimming in a final.

CAELEB DRESSEL WITH ANOTHER GOLD MEDAL! He wins his 3rd gold at FINA with an American record 47.17!! pic.twitter.com/mP5sQQL24I

Dressel got off to a fast start and finished with a time of 47.17, beating the field by 0.7 seconds. The 20-year-old rising senior won Team USA’s first gold medal in the 100 free since Anthony Ervin won it in 2001. Nathan Adrian came in second with 47.87. This was also Dressel’s third gold medal this week; his other two came in the men’s 4 x 100 meter freestyle relay and the mixed 4 x 100 meter medley relay.

Adrian was impressed with his teammate.

“Anybody who’s followed Caeleb is not surprised by this. They know the sky is absolutely the limit,” the Olympic gold medalist said, according to Karen Rosen of teamusa.org.

Since his swimming career got started in the 2013 FINA World Junior Swimming Championships, Dressel has been very successful, winning a total of 11 medals including six gold medals. In addition, he’s had a productive college career. He won the 2015 NCAA championship in the 50-yard freestyle as a freshman, individual titles in the 50 meter and 100 meter freestyle at the 2015 national championships, and broke the American and US Open records in the 100-yard butterfly and 100-yard freestyle at the 2017 NCAA Division I Championships.

How other Gators did

Szilagyi of Hungary placed seventh in the women’s 200 meter butterfly final. It’s her best finish in the FINA Championships so far. She finished with a time of 2:07:58 in the race, which is her fastest swim in the 200 fly this week.

Liliana Szilagyi (Hungary) finishes seventh overall in the women's 200 fly final with a time of 2:07.58!!

Representing New Zealand, Corey Main clinched a spot in the 200 meter backstroke semi-final. It’s his second semi-final of the week. Main finished with a time of 1:58:34 to place 16th overall in the preliminary rounds and swam with a time of 2:01:00 in the semis.