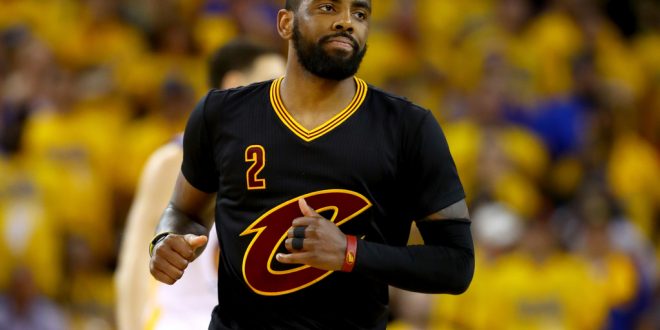 OAKLAND, CA - JUNE 19: Kyrie Irving #2 of the Cleveland Cavaliers reacts after scoring in Game 7 of the 2016 NBA Finals against the Golden State Warriors at ORACLE Arena on June 19, 2016 in Oakland, California. NOTE TO USER: User expressly acknowledges and agrees that, by downloading and or using this photograph, User is consenting to the terms and conditions of the Getty Images License Agreement. (Photo by Ezra Shaw/Getty Images)

The Cleveland Cavaliers management has shed some light on the Kyrie Irving saga that has blown up recently. Cav’s owner Dan Gilbert and new general manager Koby Altman called the situation “fluid” in a news conference yesterday. They would not comment on the reality of a trade request for the point guard. Koby Altman did mention that he believes the entire scene has been “overblown” by the media.

Cavaliers owner Dan Gilbert has assured the media that the front office is “in good shape” despite all the chaos. Even the NBA’s commissioner Adam Silver has left his remarks on the situation in Cleveland.

Dan Gilbert believes the organization will be moving forward and look to be “competing for championships” for many years to come.

In his introductory news conference on Wednesday, General manager Koby Altman stated that Kyrie Irving is a “core piece” to the franchise. Kyrie was drafted by Cleveland with the first overall pick in the 2011 NBA draft. In the 2011-12 season, he was crowned the NBA Rookie of the Year, and since then has become a four-time NBA All-Star. He has featured with the Cavaliers in three straight NBA finals, winning the championship with Cleveland in 2016.

Cavaliers owner Dan Gilbert and many others believe Kyrie Irving is “one of the best guards in the NBA.” Gilbert has also mentioned that Kyrie is still in contract with the Cavaliers, and expects to see him at camp.

The King of The Land

LeBron James and Cleveland still seem to be a match made in heaven. In this off-season, there have been many rumors linking James with a move away from “the land.” Although, it seems as if general manager Koby Altman has put these rumors to bed at his introductory news conference. He stated that LeBron is “deeply committed” to the Cavaliers organization, and has “deep roots” to the city of Cleveland. LeBron James played high school basketball in Akron, Ohio. After graduation, he was drafted by the Cavaliers as the first overall pick of the 2003 NBA draft. So it comes as no surprise that he wants to stay and compete with his home team.

To stir the pot even further, the Cleveland Cavaliers have signed point guard Derrick Rose to a one-year contract. Derrick Rose has succumbed to many injuries in his career, but looks fit and healthy for the upcoming season. Koby Altman stated that the Cavaliers signed Rose to be a “backup point guard” to Kyrie Irving. Altman believes Rose is ready for that role after being a starting point guard role for his entire career. Although, with all the Kyrie Irving trade request rumors, it is tough to see what role will be required of the injury-prone point guard.