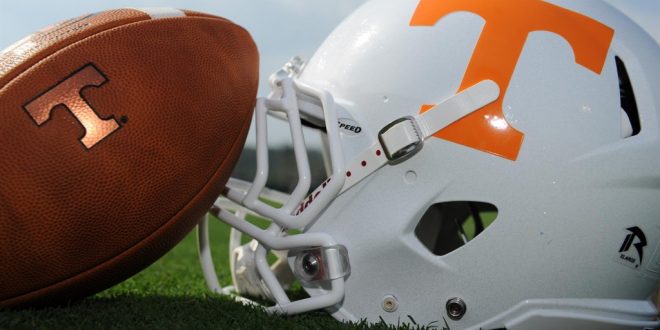 Tennessee is the last team at SEC Media Days

The Tennessee Volunteers football program opened up last season at number nine in the Associated Press preseason poll. However, despite wins against SEC rivals Florida and Georgia, the Vols failed to live up to expectations. Tennessee were favorites to win the SEC east, but finished at 9-4 behind Florida which included three straight losses against Texas A&M, Alabama, and South Carolina. The new 2017 AP preseason poll has the Volunteers at 25. Davis, who played college football at Tennessee, says that fans should see last season as a disappointment despite rankings going into regular season.

Florida, Georgia, and Tennessee all finished with great 2017 recruiting classes (Tennessee taking the best overall player in the 2017 ESPN 300 rankings Trey Smith). Tennessee now sit behind both teams in the preseason rankings and are predicted to finish third in the SEC east. Nonetheless, Davis states that this is the best shape the Vols football program has been in years.

The NFL season begins with many new headlines including a lot of questions at quarterback and the teams that they will play for.

New Miami Dolphins quarterback (QB) Jay Cutler had retired after a disappointing last season that is highlighted by multiple injuries and the Chicago Bears 3-13 record. Cutler decided to join the NFL on FOX broadcast team before coming out of retirement because Miami starting QB Ryan Tannehill suffered a season ending injury. Cutler planned on staying permanently retired, but Charles Davis says he received a contract offer he could not turn down.

Cutler is enthusiastic to play under Dolphins head coach Adam Gase, who used to be Cutler’s offensive coordinator in Chicago.

What do you all think of Jay Cutler in a #Dolphins uniform? He hit DeVante Parker on this pass. pic.twitter.com/dCaLYKw2rv

The NFL had many quarterbacks come out of the NFL Draft including Mitch Trubisky, Deshaun Watson, and Patrick Mahomes. Additionally, veterans such as Marcus Mariota, Blake Bortles,  Jameis Winston are trying to lead their teams into possible playoff births. With preseason in full swing, Charles Davis says that he is not surprised by Watson’s play and can see why Trubisky was taken first of them all. The Houston Texans and the Chicago Bears have been teams without a franchise quarterback recently.

On the other hand, Mahomes is likely to replace Alex Smith for the Kansas City Chiefs. Mahomes is the opposite of Smith because of his ability to throw long instead of continuously throwing short passes. Both the Tennessee Titans and Tampa Bay Buccaneers are shoe-ins to make it into the playoffs this season.

Blake Bortles and the Jacksonville Jaguars have struggled to be good despite their weapons at wide receiver and on defense. Bortles had a decent season two years ago, but he struggled to be efficient and resulted in the Jaguars finishing 3-13 last season. Davis says this season will make or break Bortle’s spot as starter.

Dak Prescott is one of the last big questions at quarterback. The rookie had a phenomenal season after coming out of Mississippi State and replacing Tony Romo. However, his star running back Ezekiel Elliott is suspended for the first six games of the season. Can Prescott and the Dallas Cowboys backup running backs produce enough to replace him and win? Davis thinks that Prescott has what it takes.

The New England Patriots are favorites to win the Super Bowl again because of “instinct,” according to Charles Davis.