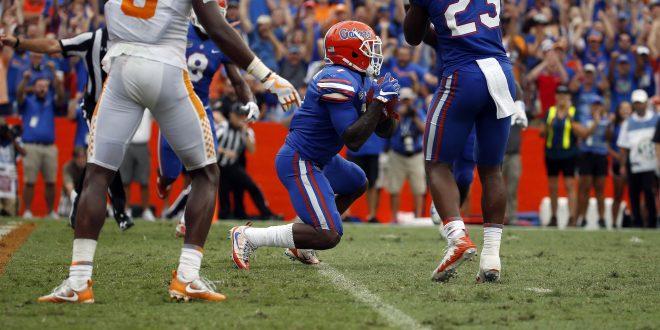 SEC Plagued with Injuries After Week 3

Major injuries for most SEC squads have left many question marks heading into an intriguing week four of college football. This week features key match ups for both the East and West divisions, and promises to be the most dramatic weekend of SEC play yet.

The recent hiccups on defense have a lot to do with the current lack of depth in their linebacker corps. Linebackers: Rashaan Evans, Dylan Moses, and Anfernee Jennings all returned to practice this week, it is unclear if they will play on Saturday.

Jalen Hurts lost a target in tight end Miller Forristall when he tore his ACL during Saturday’s game. Coach Saban confirmed that Forristall will undergo surgery and miss the rest of the season.

Vanderbilt upset their first non-SEC ranked team in 71 years this week, and now Derek Mason’s Commodores have the opportunity to take on the best team in the country at home in Nashville. QB Kyle Shurmur will have to face the toughest defense of his career, but Jalen Hurts won’t have a cake walk either. Mason’s defense has been a major strength for the team, however they have yet to face an SEC opponent let alone Nick Saban and Jalen Hurts.

#Vandy's Nifae Lealao: "We expected to get this. When you come to our house we show you how to play some SEC ball… Alabama, you're next." pic.twitter.com/koegcHRZnE

Florida (1-1) will battle Kentucky (3-0) for the top spot in the SEC East. Without Feleipe Franks’ epic throw, as time expired, the narrative heading into the Kentucky game could’ve been vastly different. A glimmer of hope for a Gator’s offense that has seen many lackluster seasons since the departure of Tim Tebow. The Gator’s offense is healthy heading into this week, however conduct issues have removed two major game-changers indefinitely: running back Jordan Scarlet and wide receiver Antonio Callaway.

The Gators defense did suffer a few dents, but performed very well. Defensive Coordinator Randy Shannon called some fantastic plays in the red zone and gave Franks the opportunity to win it at the end. Veteran defensive back Duke Dawson suffered a head injury and is questionable. Backup linebacker Kylan Johnson is questionable and wide receiver James Robinson is visiting a specialist this week to evaluate his heart condition.

Kentucky will likely be without linebacker Jordan Jones. Jones was the Wildcat’s leading tackler one year ago.

After a heartbreaking loss in “The Swamp”, Tennessee (2-1) hopes for an easy bounce-back victory against the University of Massachusetts (0-4). The Volunteers were missing their top wide out from last year Jauan Jennings on Saturday, and will have to battle through 2017 without him.

Tennessee’s defense is in a state of despair after losing two more starters Cortez McDowell and Todd Kelly. The loss of McDowell is crucial due to the pre-season injury to Darin Kirkland Jr. Tennessee’s linebacker depth will now be a huge question mark when they take on Nick Chubb and the Bulldogs in two weeks.

A hampered Texas A&M (2-1) may need to start their freshman QB a 4th consecutive week when they take on an Arkansas (1-1) team that might be the healthiest in the SEC. Both teams will have to deal with quarterback injury issues.  Arkansas’ only injury of note so far was starting QB Ryan Pulley who went down in the season opener.

The Mississippi State Bulldogs (3-0) are coming off the biggest upset of the college football season after sinking a top ten LSU team at home. The Bulldogs move into the AP Top 25 for the first time this year at seventeen. Miss St. QB Nick Fitzgerald has looked like the second coming of Dan Marino so far this year. They now face the Bulldogs Hailing from the SEC East: Georgia.

Georgia comes into this week ranked eleven. Questions still remain about their starting signal caller Jacob Eason . Eason injured his knee in the season opener. True freshman Jake Fromm has led Georgia to a perfect record so far. Mississippi State’s defense will be the first SEC defense Fromm faces. Kirby Smart told reporters that Eason has returned to practice, but no said he has no time-table for his return.

Other notable injuries around the SEC include South Carolina’s Deebo Samuel. Samuel broke his leg and is out for the season. His season was off to an amazing start with 2 kick returns for touchdowns.

Auburn cut their starting QB from last season, Sean White, after he was arrested earlier this week for public intoxication. Gus Malzahn will however add running back Kerryon Johnson to his backfield against Mizzou. Johnson rejoins fellow Jr. Kamryn Pettway in a loaded one-two punch backfield.

This weekend SEC football will be in full swing. 2017 promises to be interesting, so far five SEC teams are in the top 25 and three others received votes. With so many early season injuries on every team, anybody and anyone is on upset watch in crucial week 4.