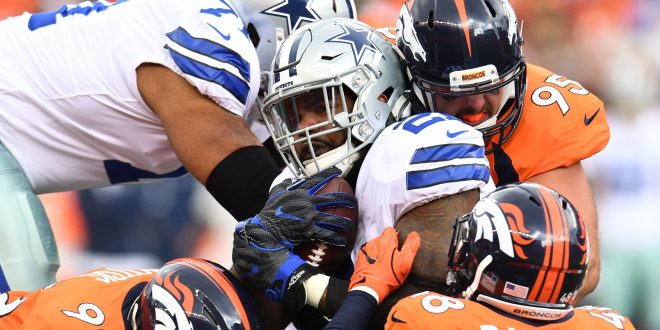 The Dallas Cowboys (1-1) had a rough outing last weekend against the Denver Broncos (2-0) losing 42-17. The Cowboys’ offense struggled to get anything going on offense being out gained 380-268. The Cowboys ground game was only able to get a total of 40 yards. The big story for the Cowboys came from the lack of effort of running back Ezekiel Elliot displayed.

Elliot was unable to find any open field against the Broncos’ defense. By far the worst performance in his career, Elliot carried the ball nine times for a total of eight yards. Elliot has never had a game where he failed to rush over 50 yards and career averages 102 yards rushing a game. Obviously, this type of performance led Elliot to frustration. But to the point where the “incident” occurred?

Ezekiel Elliott has decided to accept his suspension from Cowboys effective immediately after this interception pic.twitter.com/fCYOk6XoBD

With the Cowboys down by 18 points in the third quarter, Elliot ran a slant route. Quarterback Dak Prescott was intercepted by the Broncos’ Chris Harris. Harris was only five yards away from Elliot at the time of the interception. Consequently, Elliot gave up on the play and decided not to pursue Harris. This play sparked outrage resulting in all types of criticism even from former NFL great LaDainian Tomlinson.

Head Coach Jason Garrett believed this attitude to be very contradictory to Elliot’s normal demeanor.  He praises Elliot as being a hard worker with passion for the game, even during practice. Garrett will address the issue to the team during practice.

On Monday Night Football, the Cowboys will look to bounce back against the Arizona Cardinals (1-1).  With all eyes on Elliot it’s important he shows how dedicated he is to his team.