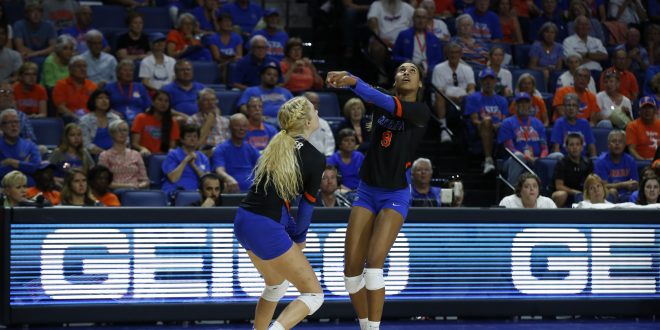 The No.1 Gator volleyball team are the last undefeated team in the nation and they want to keep it that way.

Tonight, the Texas A&M Aggies will be looking to play spoiler on Wednesday night when they visit Exactech Arena.

Fast out of the gates

With their 11-0 (3-0 SEC) record the top-ranked Gators are off to their fourth-best start in program history.

Florida will be looking to carry over their momentum from this past weekend. The Gators defeated Tennessee and LSU in six total sets, making quick work of both teams. It’ll be tough to take down the Aggies in three sets as 8 of the last 13 matches have gone to at least four sets.

Getting to know the opponent

Don’t let Texas A&M’s (4-6, 1-2 SEC) record fool you. The Aggies have the No. 1 strength of schedule in the nation. Florida will be the sixth top-five opponent they face this season. Texas A&M, historically, has not been very successful against the Gators on the road. The Aggies have a 0-6 lifetime record when facing the Gators in Gainesville.

In their last time out, Texas A&M defeated the Georgia Bulldogs in three sets at home. A player to watch for is Sophomore outside hitter Hollan Hans, who had a career-high 32.5 points against No. 5 Penn State. Hans ranks third in the SEC in kills (4.18), points (4.82) and aces (0.47) per set.

After another solid performance over the past week, the Gators have been given more honors. Freshman outside hitter Paige Hammons earned SEC Freshman of the week honors after two great outings. Hammons had 14 kills, 15 digs and three blocks in Florida’s wins over Tennessee and LSU.

Another Gator was honored on Tuesday but it wasn’t only for her play on the volleyball court. Senior Rhamat Alhassan was nominated for the 2017 Senior CLASS Award. The award is given to student-athletes who have achievements in the classroom, community, character and competition. The winner will be announced during the 2017 NCAA Division I Women’s Volleyball Championship.

Florida and Texas A&M will begin their match at 7 p.m. A live telecast can be seen on ESPNU and a live radio broadcast will be on ESPN 98.1 FM, 850 AM WRUF.