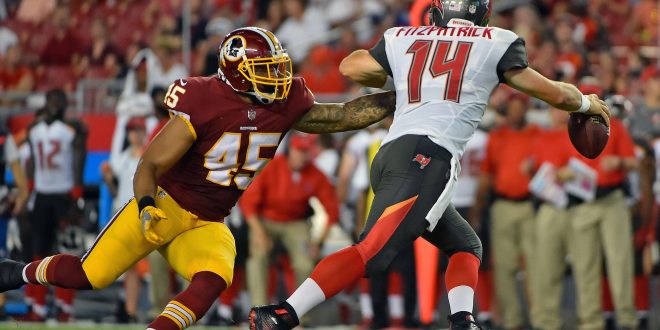 The Tampa Bay Buccaneers started strong this NFL season, but now have a losing record. Last night, the team fell to the Arizona Cardinals 38-33. Quarterback Jameis Winston left the game in the first quarter with a shoulder injury. Then, it was up to backup Ryan Fitzpatrick to take the snaps. And he did not do a bad job.

Since he entered the NFL in 2015, Jameis Winston has never had a serious injury. However, after last night’s crushing blow to his throwing arm, that streak may be over.

Part of Winston’s tenacity as a player comes from his reluctance to ever leave the field. Fans have seen him play through hard hits and dash to the locker room post-game. They’ve seen him throw the ball, then wince out of pain. But, something Bucs fans almost never see is Winston stop playing during a game.

Last night, he tried to maintain his composure and keep going after the fall. Only minutes after though, he shook his head and was out, with just 61 yards on record.

Tampa Bay Bucs fans may find it hard to see anyone other than Winston under center. But, Ryan Fitzpatrick is hardly a no-name. After going drafted in the seventh round out of Harvard in 2005, he has played for seven NFL teams. And in a superstition dubbed “The Fitzpatrick Curse,” starters’ injuries led the backup to start for all seven teams.

His 12-season career includes ten seasons with stats. In those ten seasons, he racked up almost 26,000 yards and 166 touchdowns.

Stats for the Bucs

Last night, Fitzpatrick played at Raymond James Stadium for the first time. Against the Cardinals, he passed for 290 yards and completed 22 passes on 32 attempts. But, even more importantly, he put points on the board. Tampa Bay started very slowly in the presence of Arizona. At halftime, the score was 24-0, Cardinals. By the third quarter, it was 31-6.

However, during the fourth, a switch flipped inside the Harvard grad. He passed for three touchdowns, including the first one ever between two former Harvard players. (The second one being tight end Cameron Brate).

Fitzpatrick to Brate for six. pic.twitter.com/1w9KAt0gY0

But, how do those stats compare to Winston’s? Winston picked up his season-high three touchdowns against the New York Giants. His season-high yardage sits at 334, against the New England Patriots. So in one game, Fitzpatrick was able to tie the starter’s season-high touchdown record and inch up on his yardage. Now, the Bucs still lost and losing Winston could begin to hurt them as early as next week. For now though, Fitzpatrick is not a death wish at quarterback.

Oldies For the Win

At 34, Ryan Fitzpatrick is not a young football player, but many quarterbacks are similar in age. A position in the NFL that seems to be getting younger and younger is running back. But, Arizona Cardinals running back Adrian Peterson is 32. And his age was starting to show. This week, Peterson was traded away from the New Orleans Saints after just four games (and 81 yards) with them.

But, the quick turnaround did not seem to bring Peterson down. In fact, it might have done the exact opposite. In his first game as a Cardinal, he rushed for 134 yards and two touchdowns. His second touchdown was the last score on the board for Arizona, which he was happy about.

2017 has been a rough year for Peterson, even before the four-game run with the Saints. In February, the Minnesota Vikings opted out of his contract after ten great years. Then, the Vikings held him to 18 yards as a Saint. In the same game, Minnesota’s new back Dalvin Cook broke his old record for rushing yards on rookie debut. So, this strong first game in Arizona could serve as a confidence boost to Peterson in games to come.

The Tampa Bay Bucs now sit at 2-3, last in the NFC South. Next week, they will face the Buffalo Bills (3-2). Unfortunately, the team is without their leader. But, if the Bucs want to make the playoffs for the first time since 2007, the time to step up is now.

Previous Two Touchdowns in the First 25 Seconds: A Recap of the Jags vs. Rams Game
Next NFL Stars Fall To Injuries